CERAWeek returns to Houston in-person for their 40th anniversary 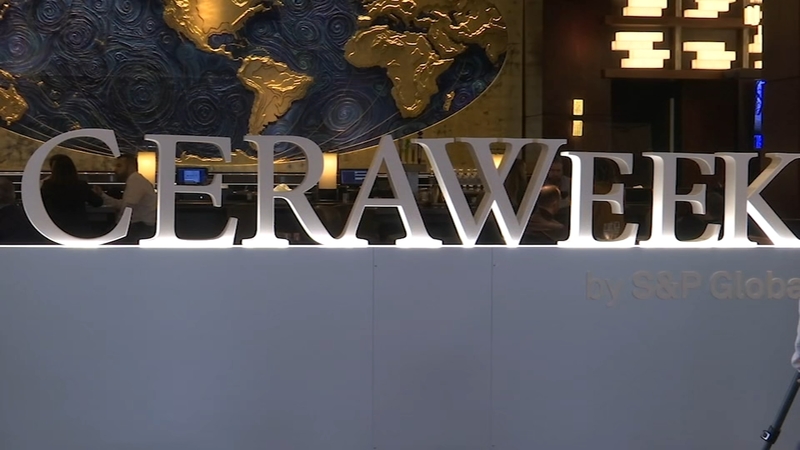 CERAWeek returns to Houston in person for their 40th anniversary

HOUSTON, Texas (KTRK) -- The largest meeting of oil and gas giants and leaders began converging in downtown Houston on Monday and will run until Friday.

The energy conference, CERAWeek, kicked off at the Hilton America's downtown. This was the first in-person conference since the COVID-19 pandemic forced the event to go virtual in 2020 and 2021.

According to Gas Buddy, the national average for gas has gone up 49 cents per gallon in the last seven days. The largest seven-day increase in history since after Hurricane Katrina.

Gas prices will undoubtedly be one of the topics taking center stage at the energy conference this week.

Oil and gas leaders and producers from around the globe will discuss a wide range of topics, including energy markets, workforce, and innovation, during the five-day conference.

"It's relevant to talk about these topics because, in energy and environment, things are changing," said Katie Mehnert, the CEO of Ally Energy. " The way we consume energy, the way we produce energy, and the way the environment is responding to energy. It's very important for us to get together to talk about these topics as an industry, especially right now given what's going on in the state of the world abroad."

Mehnert said the oil price topped $130 a barrel due mainly to the situation between Russia and Ukraine. She said energy leaders will use this week to talk about how the industry will move forward.

She said now is the time to focus on how the industry will move forward and what this means for consumers.

"I think a lot of people think that the oil companies influence prices, and they don't actually. Oil prices are impacted by market volatility which you see right now, and consumer demand," said Mehnert. "Many people are pulling out of Russia, including the oil companies. So what you're starting to see is the world responding to a perceived supply gap."

"Certainly, it is really important because we bring together everyone not only in our industry, but all industries because we all consume energy. You think in terms of just maybe power or electricity or fuel, but in fact, energy is how we all do our jobs, no matter what they are." said Steve Louis, the managing director of Eternal Energy.

He said to talk about the issues at hand. Industry leaders need to be in a room together discussing.

"We have CEOs from all the energy companies. We have technologists. We have investors. We have policymakers. All coming together to discuss things like the energy transition, how to navigate that, and what technologies do we need to be investing in," Louis said.

Consumers right now are concerned with the price of gas. Louis said now is time for consumers to conserve now as much as possible.

"A lot of us don't change our behavior unless it hits our pocketbook in a meaningful way. We've seen these cycles in the past. In the past, we used to buy when oil prices were high. We buy smaller cars, for instance. But this year, in particular, it's interesting because now we have the option of EVs electric vehicles." Louis said. "The problem is oil and gas companies see that oil prices are too high, gas prices are too high, people are going to move to the renewable sector and in some form of EVs. What we're finding out is that once people go electric, they're not going to come back to gas-powered vehicles. So that's a real cause of concern for oil and gas companies."

As for Houston's economy, Louis said, "We have a lot of energy and energy-related companies in Houston. They're going to be reacting in one way is they know that this is a short-term cycle versus a long-term trend. The profit they're getting from high oil prices is probably one of four things."

1) Continued investment in renewables, wind, solar, geothermal. "We spent about now invest on $755 billion in green energy. We've believed that will continue to happen as there are more funds available."

2) Energy companies will probably give a lot of profits back to their shareholders. " Energy stocks have underperformed the last several years, and it's time for shareholders to get a bigger dividend."

3) Retain earnings and be able to pay off those loans when there's another downturn. " We don't know when that will be."

4) Invest in oil and gas projects. Domestically. "Russia accounts for about 7 million barrels of oil equivalent per day in terms of exports, so the United States and Texas specifically are very well positioned to help offset that discrepancy by one using our vast shale gas reserves and then also we have a lot of wind energy here in this country in the state as well."

"There's one caveat, that I'll mention, the price to develop a barrel of oil here will increase along with inflation. It might increase even at a higher percentage because, well, in the oil and gas industry, we have a bit of a labor shortage. We remember in 2020, we lost about 107,000 oil and gas professionals, and probably a lot more than in 2021," Louis said.

Those professionals aren't coming back for the same salaries they had before, if at all. So that's been increased costs. Similarly, all of the equipment that has been idle for so long may or may not have been maintained. So there are costs associated with those low startup costs. And of course, all of the assets that we have, both onshore and offshore in terms of oil and gas assets, they're depleting reservoirs, so you always have to continue exploration. And there's a cost associated with that as well.

Louis believes the surge in gas prices could be temporary. "We may have enough wind or solar resources to offset that or vice versa. Be smart with how you spend your money, continue to invest in the United States in the economy, and we'll be fine in the long run."

Mehnert agrees. "The industry benefits from higher price because we pass those costs along to the consumer, much like Apple or any other company would do. We're starting to see a lot of price increases due to inflation. We're also seeing prices drop for food for other goods. I don't think this is going to last very long. I think that's why you don't see companies responding very quickly, right by hiring up their workforces or drilling more oil and gas. However, if we were to drill more oil and gas here in the States, we would protect our supply position."
Report a correction or typo
Related topics:
community & eventshoustonenergytexas politicstexas newsbusinessmoneygas pricesworking familiessave moneyoil
Copyright © 2022 KTRK-TV. All Rights Reserved.
BUSINESS
Businesses that help employees get abortions could be next target
Biden pushes economic, security aims as he ends South Korea visit
'NFTs: Enter the Metaverse' | Watch the film
Wall Street appears headed for another rocky day
TOP STORIES
NRA convention in Houston day 2: Protests continue at Discovery Green
Uvalde school police underwent active shooter training 2 months ago
Flight cancellations kick off Memorial Day weekend
Livingston school presents student's diploma who was killed in 2021
'Is it worth my kid?' Parents of TX school shooting victim speak out
iFest changes locations after NRA protests take over Discovery Green
Timeline breaks down Uvalde school massacre
Show More
Police inaction moves to center of Uvalde shooting probe
Texas gunman threatened rapes, shootings on Yubo app, users say
Over 3K CenterPoint customers were powerless in NW Harris Co.
There's now a small chance for rain on Memorial Day
Woman gets 15 months in prison for punching flight attendant
More TOP STORIES News