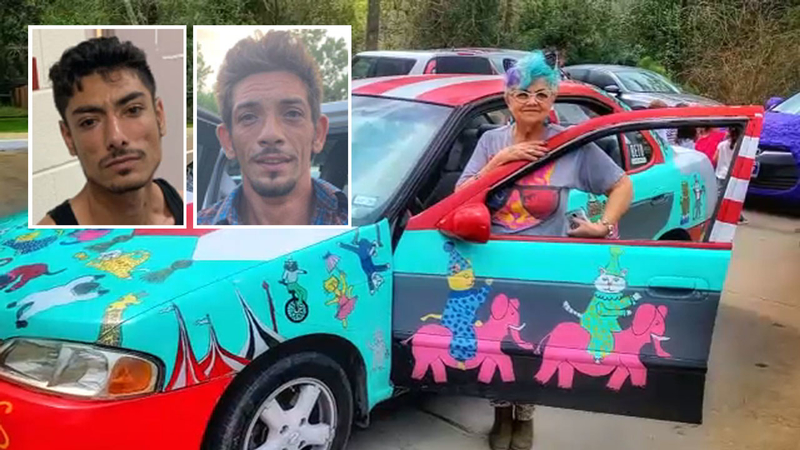 HOUSTON, Texas (KTRK) -- The wobbly tire scam is nothing new in Houston, where someone waves you down tells you there's something wrong with your tire.

Investigators say two men took the scam to the next level, at one point getting inside a woman's art car and then driving off. But that's not all: deputy constables say $400 was also taken from her purse.

When the two suspects crossed her path Sunday, she had no idea what kind of crooked scam she was about to fall victim to.

"I'm used to people stopping me and saying, 'Oh my God, I love your car!'"

Sandra's art car stands out. So when she was flagged down as she drove down Yale, she rolled down her window.

She says Speed and Guliano Thompson had nothing to say about her car, but her tire.

"'Ma'am, your tire is fixin' to fall off," the men allegedly told Sandra. "He said, 'You're gonna have a wreck, you gotta pull off the road.' He was very convincing."

Sandra pulled over near Yale and 7th Street. She got out of the car. One of the men fidgeted with her tire, then claimed to have fixed it.

From there, she said things got weird.

"He started praying for me," Sandra said. "They tried to put their hands on me. I was like, 'Uh-uh, don't touch me.'"

The two claimed they were a father-son duo.

"Next thing I know, daddy's in the car driving down the street, my purse is in the back seat of the car."

He returned with the car. Sandra says they told her he was testing it out.

But when she got back in her driver's seat, she says he moved to the passenger's side and they wanted money for their "work."

"I was truly afraid," Sandra said.

She says she was ordered to drive.

Sandra eventually pulled off the road, jumping from her car and screaming as loud as she could.

"I just did what I could. I didn't have any weapons, I just used my mouth."

RELATED: 2 suspects on the run for Houston-area scam targeting elderly

The two took off in a Mustang. Deputies say it was stolen. The two are actually brothers, according to Constable Alan Rosen.

"It's so sad that they're preying on people like that," Rosen said.

The constable says he believes they have scammed others.

Sandra's message to anyone who may fall into a similar position: "Don't fall for it. And please don't judge me."