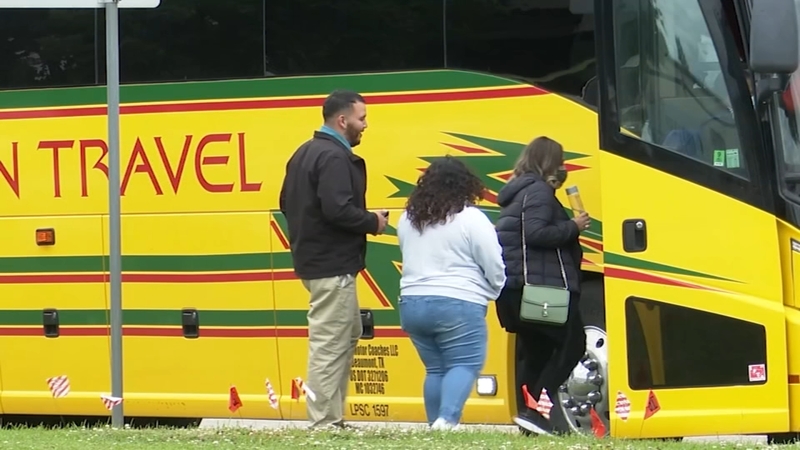 HOUSTON, Texas (KTRK) -- Immigrant led organizations are searching for answers as to why officials abruptly closed a Houston-area shelter which was housing hundreds of young migrant girls on Saturday.

A flurry of activity was seen at the shelter just before the U.S. Department of Health and Human Services announced the teens would be transferred or reunited with family or sponsors, more than two weeks after the facility opened.

"Today, HHS announced that all of the children in HHS Office of Refugee Resettlement (ORR) care at the Emergency Intake Site (EIS) for Unaccompanied Children at the National Association of Christian Churches site in Houston, Texas (NACC Houston) will be immediately unified with sponsors or transferred to an appropriate ORR facility," agency officials said in a statement released Saturday.

FIEL executive director Ceaser Espinosa said the conditions inside the warehouse were 'inappropriate for anyone, especially young girls', who range in age from 13-17 years old. He added that employees of the facility would only let the teens get out of their cots a few times a day to shower and use the restroom.

Fiel member Alan Cisnero said while he was out with his family Friday night, he noticed a large amount of first responders arriving to the facility. He said he then proceeded to see what the issue was. Cisnero said officials told him they couldn't share much information regarding who was involved in the incident.

U.S. Rep. Sheila Jackson Lee said Saturday a federal employee who was volunteering at the facility had a medical emergency and died.

While the medical incident may not have been related to the facility's conditions, Espinosa said 500 girls were on the roster at the time, meaning it was at capacity. Due to the amount of girls, he said they were unable to properly social distance inside the warehouse.

"The NACC Houston EIS and other Emergency Intake Sites are intended for use as a temporary measure," DHS officials said.

The reason for the transfers Saturday weren't immediately clear, though the agency cited "continuity of care under conditions that meet our strict standards of care in ORR state licensed shelters, the Carrizo Springs Influx Care Facility or Emergency Intake Sites where beds have become available."

"I spoke to a child who had been in the desert for 12 days. Every child that I spoke to, these were girls, and they were under 14, had crossed the Rio Grande at night," U.S. Rep. Sheila Jackson Lee said on April 1. "Every one of them had that frightening experience."

Congresswoman Sheila Jackson Lee gives update on the 300 migrant girls who arrived in Houston on Friday night. Jackson Lee says the children will have access to medical care, food services and warm beds while they wait for a family member.

There are 10 migrant housing facilities total; nine are in Texas and one is in San Diego.

Here are the details for all nine Texas centers: