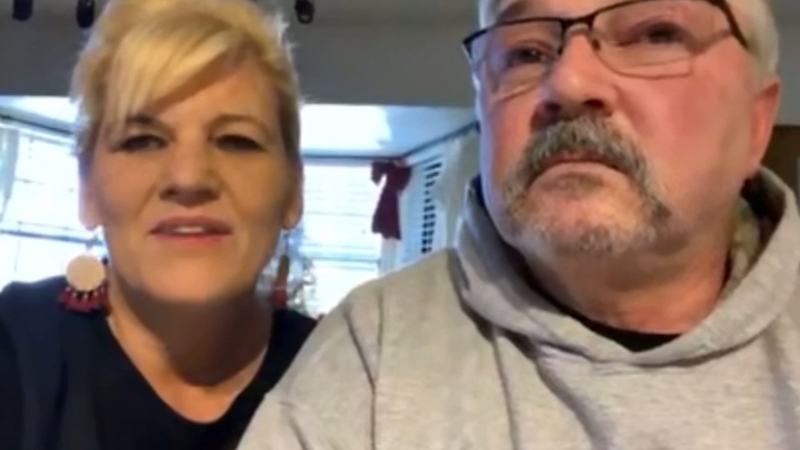 CHAMBERS COUNTY, Texas (KTRK) -- A husband and wife traveling home Saturday morning called police on an erratic driver, which ultimately led officials to the body of a 28-year-old Houston woman.

Augury and Kimberly Lee were driving east on I-10 in Chambers County when they said another driver almost hit them several times.

"He was running anywhere from 40 to 90 [miles per hour]," the couple said during an interview on Monday. "He was putting his brakes on at different times. He was going back and forth. It was going to be a matter of time before he eventually took somebody out."

The 28-year-old woman found in the trunk of a car in Beaumont has been linked to a house on Houston's south side.

The driver seen by the couple was later identified by the Texas Department of Public Safety as 35-year-old Victor Campbell Jr. Augury called 911 at the time and said the operator told him to turn on his hazard lights and was asked to follow Campbell.

"Normally, you call and report something like that and the officers would have told you, you know, 'Description of the car, direction he's headed, OK, back off of him,'" he said.

The body of 28-year-old Briana Teirra Johnson was found in the trunk of the car following a brief chase. The Lees wondered if they were told to follow Campbell because Johnson had been reported missing or her car, which was being driven by Campbell, had been reported stolen.

DPS said Monday that they had not received any reports about the woman or the car prior.

Meanwhile, Kimberly was in the passenger seat streaming what was happening live on Facebook. Her voice trembled as she warned her friends to stay off of I-10 for their safety.

"Oh Augury, I can't see this," Kimberly was heard saying in the video stream. "You've got to get me home. We're going to get killed in the midst of this, do you understand?"

She said when Campbell got next to their truck, she noticed he was smoking something and had a glazed look on his face. She said she threw a cup of coffee at his window in hopes of getting his attention.

"He was glaring straight ahead like he wasn't even in his mind," Kimberly said. "Like there was no soul there. There was no care in the world."

A DPS trooper intercepted Campbell on the interstate and when he tried to pull him over, a chase ensued. It ended in Beaumont where Campbell crashed the car.

"God wanted to bring that girl home to her mom," Kimberly said.

The couple said it was the perfect storm that put them where they were on Saturday. They drove from their home in La Belle, Texas, to Huntsville Friday to buy a four-wheeler from a seller who never showed up to meet them.

The couple stayed in a hotel in Huntsville Friday night and drove home early Saturday. They said they took a route home that they would not normally take.

"I don't understand why people have to go the way they do, but I know she is home with her heavenly father," Kimberly said. "I hope that somehow, in some way, we helped in a small way get her back to her family."

As of Monday evening, DPS said there were no updates in the investigation. An autopsy has been ordered to determine how Johnson died.