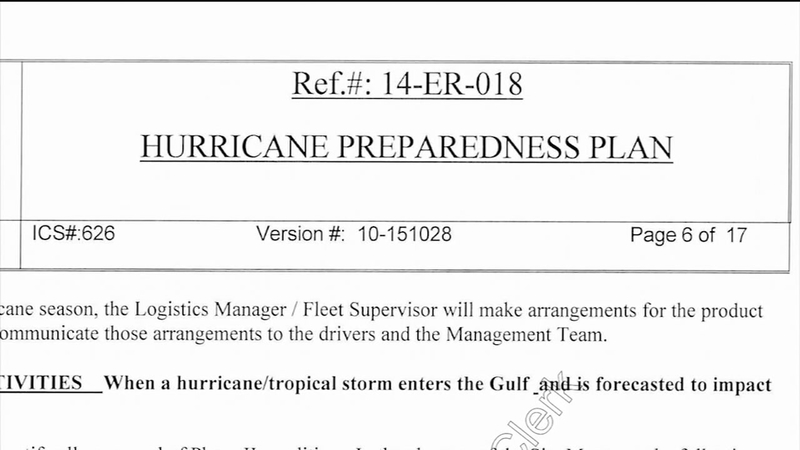 CROSBY, Texas (KTRK) -- Court documents filed Wednesday in Harris County's criminal case against Arkema appear to show the stark differences between how it and another chemical company prepared for Harvey's torrent of rainfall.

Prosecutors filed documents from AkzoNobel's Pasadena plant, including a hurricane preparedness plan, emails that detail the days before and after Hurricane Harvey and packing slips that show the company shipped hundreds of thousands of volatile chemicals to New York before the storm moved in for safekeeping.

Similar to Arkema, Akzo houses chemicals that must be refrigerated at all times or will begin to degrade and catch on fire.

The documents show Akzo plant managers ordered the plant be emptied on Thursday, Aug. 24, twelve hours before Harvey made landfall near Rockport, Texas.

"What other people did is irrelevant to the criminal case," Arkema's attorney, Rusty Hardin, told ABC13 in a phone interview. Hardin suggests prosecutors have a burden to prove Arkema's thought and intent at the time of the storm was reckless, not that it was different from another company's plan. He points out AkzoNobel's Pasadena plant is closer to the ship channel and the coast than Arkema.

Questioning the timing of the filing, Hardin said this appears to be more for the public than a jury.

Arkema and its executives are charged with "recklessly" releasing toxic chemicals during Harvey's aftermath.

Rising water foiled all the plant's backup plans. The plant lost primary power after it started to flood. Generators that were keeping the chemicals cold were underwater as well. A nitrogen system failed when its pipes were submerged. As a last resort, workers moved the sensitive product to refrigerated trucks by hand. The trucks also eventually failed, allowing the products to heat, decompose and catch fire.

ABC13 Investigates asked Arkema officials on the day of the second fire, Sept. 1, 2017, why they didn't drive trucks out when they had the chance.

"The storm came in very quickly. Water rose very quickly. We didn't feel like we would be in a position where all of our redundant levels of protection would fail," said Arkema President Richard Renner.

RAW: Ted Oberg presses for answers about why more wasn't done sooner at the Arkema plant.

Prosecutors had no comment on why the documents were filed this morning, but do have a high burden to meet.

The Texas Penal Code says someone acts recklessly when: he is aware of but consciously disregards a substantial and unjustifiable risk that the circumstances exist or the result will occur. The risk must be of such a nature and degree that its disregard constitutes a gross deviation from the standard of care that an ordinary person would exercise under all the circumstances as viewed from the actor's standpoint.
It is possible the documents could help establish the standard of care an ordinary person would exercise. Arkema has said it never anticipated this level of flooding in the past or as it prepared for Harvey.

The site has a history of flooding in the past. Arkema officials say the water during Harvey is the highest they've ever seen.

While Arkema's plan, submitted to the Environmental Protection Agency as part of its investigation into the incident, follows a similar format to Akzo's, Arkema's plan never suggests removal of chemicals from the plant and only once discusses how to handle products that require refrigeration.

Akzo's discusses flooding possibilities and extensive plans for both moving product out of the plant and into other buildings, including a detailed list of the elevation of buildings on site so managers can decide which buildings are high enough.

It details the process of moving specific chemicals based on priority and moving out as much product as possible as a storm gets closer. Arkema's plan mentions flooding once and only in relation to a loan program available to employees. The Crosby plant sits in a floodplain.

AkzoNobel turned the documents over to prosecutors after receiving a subpoena. An AkzoNobel spokeswoman had no comment on the filing.

Arkema is also the subject of numerous civil lawsuits, including one by Harris County and another by Liberty County.

Have a tip for Ted Oberg? A problem to solve? Get in touch with us on our tip page, or send a tip below. (On mobile? You can open our form by tapping here.)
Related topics:
ted oberg investigateshurricane harveychemical planthouston flood
Copyright © 2022 KTRK-TV. All Rights Reserved.
TED OBERG INVESTIGATES
Handwritten notes show what Abbott was told after Uvalde shooting
HISD's Field of Dreams comes at time others are lacking
Houston cases impacted by DNA analyst's 'false testimony' grows
DNA analyst accused of misleading testimony in decade-old case
TOP STORIES
Wanted man accused of shooting ex, killing her friend in N. Harris Co.
Gunman opens fire on woman in gas station parking lot in north Houston
Heavy rain possible Thursday and Friday
4 charged in deaths of 53 migrants in trailer in San Antonio, DOJ says
Driver shot may have been ambushed after dropping off friend, HPD says
$15K reward offered for information in death of beloved Houston pastor
1955 warrant in Emmett Till case found, family seeks arrest
Show More
Gulf disturbance up to a 40% chance of development
Family stranded trying to fly home ahead of busy holiday weekend
Woman walking with baby stroller shot to death in Manhattan
Jackson to be sworn in as 1st Black woman to sit on Supreme Court
Supreme Court to issue opinions on 2 major remaining cases Thursday
More TOP STORIES News