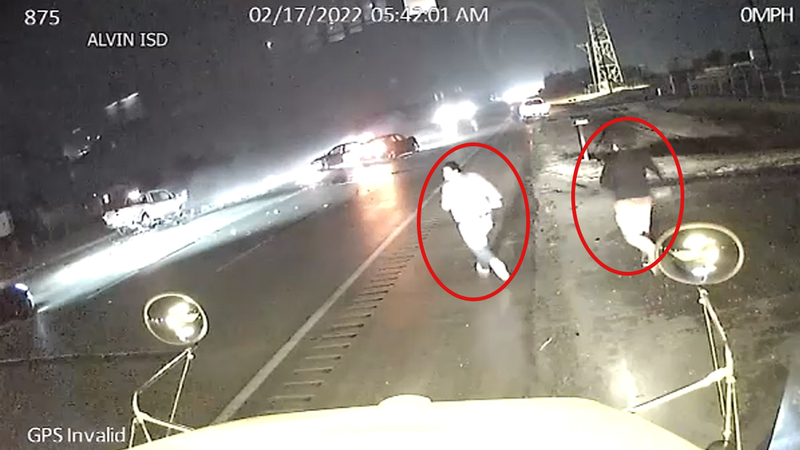 ALVIN, Texas (KTRK) -- Alvin ISD is honoring three of its employees who teamed up to save the lives of those involved in a fiery crash.

It was 5:40 a.m. on Feb. 17 when an Alvin ISD school bus pulled up to the major accident on Highway 6. Multiple vehicles had been involved in a fiery pileup crash.

Seconds after arriving, the cars erupted into flames.

Dashcam video from the bus shows bus monitors Dustin Carrillo and Jesse Neace sprint towards the chaos, while bus driver Tanya Moore called for help. There were no students on the bus at the time

"No, they piled up on top of each other, there's like five cars involved," an Alvin ISD bus driver could be heard reporting in video from her bus. "No, ma'am, they're all piling up. It's a pileup."

Just 60 seconds after arriving, Moore jumped out herself.

Nine-year-old Robert was in math class when he needed a sip of water. He tried to take the cap off with his teeth, and that's when he started choking. Toni Yates has more on this

All within 90 seconds, before the fire department arrived, the Alvin ISD employees pulled victims from the wreckage and saved lives.

At a ceremony on Friday, the school district officially honored them for their life-saving efforts.

"As soon as we saw the fire, me and him both, we immediately sprang into action," Neace said.

"(A victim) was like, 'Thank you, thank you for saving me,'" Carrillo recalled.

According to the district, a DPS trooper at the scene stated that the victims of the crash probably would not have survived without the heroic actions of the Alvin ISD employees.

Neace said as a result of the rescue, he is considering a change of employment to become a firefighter himself.

The district noted that Carrillo had only been on the job for four days when the rescue happened.

A boy was honored for heroism for jumping into action to save a classmate who was choking and rescue a woman from a house fire all in one day.