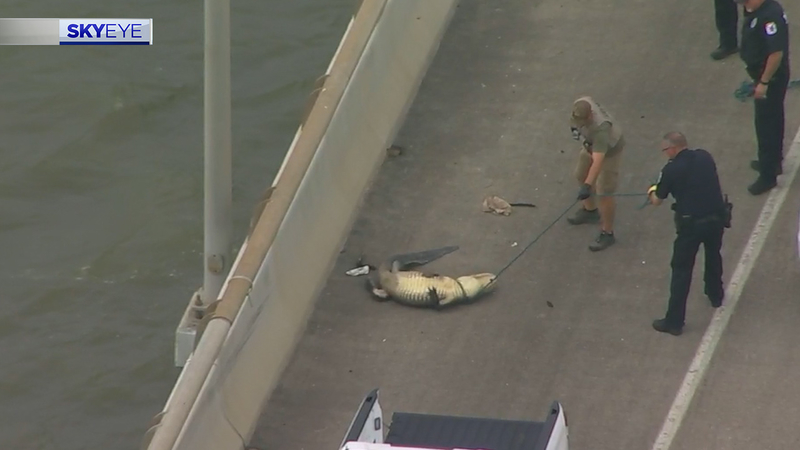 Houston traffic is a zoo, and this gator on a bridge proves it

HOUSTON, Texas (KTRK) -- This may be a new one - an alligator blocked traffic along Highway 146 on the Fred Hartman Bridge, during the late morning Wednesday. The lunchtime commuter crowd got a show, as the reptile lounged for a bit along the shoulder of the northbound lanes before being reluctantly removed.


WATCH: What you should do if you spot a gator on the freeway
EMBED More News Videos

Don't worry, if this ever happens to you, here's is the first thing you should do, according to a real-life gator expert!

Once tethered by a rope, the alligator thrashed and rolled. It took about five officers to bring the animal under control, duct taped and loaded in the bed of a pickup truck.

Finally secured, the roughly 8-foot-long alligator was transported just a short distance, to safety just beneath the bridge. There, the restraints were removed and the animal released on the grassy bank of a small tributary connecting with the ship channel.


The day's adventure over, the gator quickly waded through the shallows, and swam away to deeper waters.
La Porte police say it's not uncommon to spot alligators on the road. However, a report of an animal on this bridge hasn't happened before in recent memory.

Earlier on Wednesday, a cow got loose from a pasture and caused delays on I-10 near the East Beltway. It took the Harris County Sheriff's Office livestock unit about 20 minutes to corral the cow over to the nearby cemetery, where it rested on the road for a while until its owner could claim it and remove it to safety.

You've got to keep your head on a swivel when you're driving around here! You might just see a cow on the freeway. Take a look above.