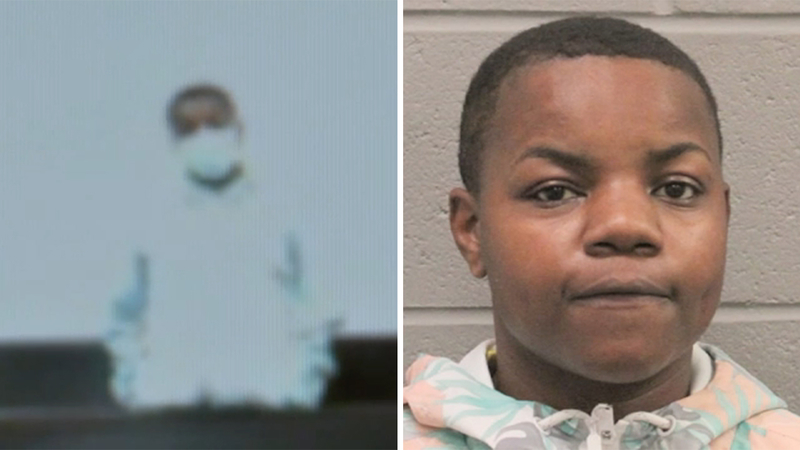 HOUSTON, Texas (KTRK) -- More than eight months after a mother, father, and their 6-year-old daughter were killed in a brutal attack at their apartment in southwest Houston, a second suspect has been charged.

According to court documents, investigators believe Williams planned the attack. She appeared in probable cause court Thursday evening, where more details about what led up to the murders were revealed.

According to police and a victim's family member, Williams was in a relationship with the mother, Donyavia Lagway. They broke up a couple of weeks before the rampage. Williams set the attack in motion by telling Davis, investigators say, that there was cash in the apartment.

The 10-year-old told police the killer knocked on the door of the apartment before the rampage.

Davis had a mask on and grabbed the 1-year-old by the hair and threw him, the little girl told police. He then shot her parents and sister in the head.

Police later revealed that Davis reportedly carjacked a man before driving to the family's apartment an hour before the murders.

Davis was arrested in July 2021. His bond was denied.

Sean Teare, the chief of Harris County District Attorney's Office Trial Bureau Division, said homicide detectives were able to obtain phone records that revealed Williams' role in the attack.
"We were able to get cell phone records that actually show that she was in contact with Xavier Davis during the murder," Teare said. "She was on FaceTime during portions of the murder with Xavier Davis. He was with her (Williams) at her apartment 30 minutes before these murders occurred. There's no reason why she shouldn't face the exact same charges that Xavier Davis."

More than eight months after a suspect was charged in the "execution style" killing of a family, a second suspect has been arrested. A judge said she attended the victims' funeral.

On Thursday, a judge denied Williams' bond and restricted any contact with the family of the victims. This comes after the judge said Williams had attended a funeral for the victims.

"Apparently it went down that she attended the funeral of the family members she tried to kill," said the judge.

Williams is expected back in court early Friday morning.