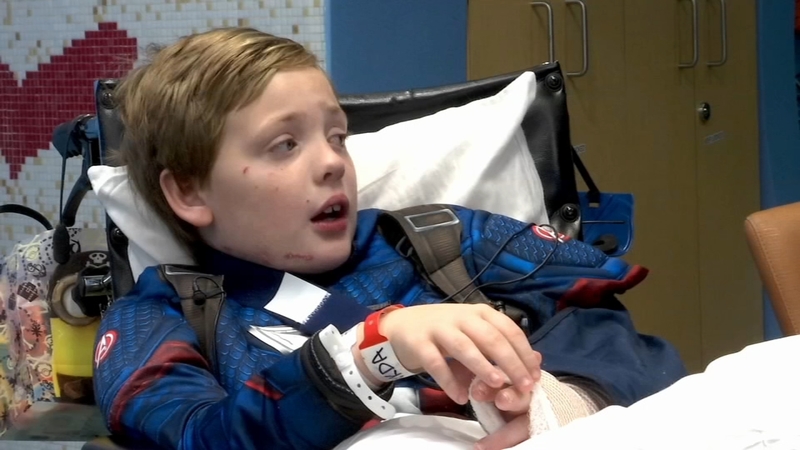 HOUSTON, Texas (KTRK) -- A 9-year-old kid has had more surgeries than people twice his age.

After he was attacked by his family's dog, Austyn Clanton was taken to Memorial Hermann Children's Hospital, where doctors there had to get creative to save his arm.

"He started biting, scratching," said Austyn, describing the moments his dog attacked his left arm in his Beaumont home. "The American bulldog was shaking this arm up and down, up and down."

Austyn was taken to a local hospital, but then transferred to Memorial Hermann Children's in Houston to be treated.

"I was a Navy corpsman before, when I was in the military. With the Marines, I've seen trauma and chaos, but it's different when it's your child," says Austyn's father, Brad Clanton.

A 7-year-old girl needed 1,000 stitches after a dog bit her face while visiting a private animal rescue in Riverside County.

Doctors at Memorial Hermann had to repair several arteries and replace a muscle in his arm, by taking one from his back.

His parents couldn't be more thankful.

"We lean on faith," says his mother, Vanessa Clanton.

His parents also say they're proud of their young son's bravery in all of this.

"It was really impressive for him to be as chill and calm and just ready," Brad said.

Austyn has a long road to recovery, but will go home soon.

It's been an experience, his parents say, they don't want to see happen again.

"It's very emotional, it's intense, it's not good. I don't want to see it again," says Brad.

Follow TJ Parker on Facebook and Twitter.
Report a correction or typo
Related topics:
beaumonthoustonchild injureddog attack
Copyright © 2022 KTRK-TV. All Rights Reserved.
TOP STORIES
Daylight shows home destroyed after standoff with shooting suspect
What we know about man accused of shooting 3 HPD officers
Widow delivers heart-wrenching eulogy for NYPD detective
Suspect arrested after 30-minute chase ends on I-45 in Texas City
Rainy Monday and arctic cold front on the way after sunny weekend
5 people charged in connection with Pct. 5 corporal's murder
How many times can I reuse my N95 mask?
Show More
Decades after TV anchor disappears, convicted rapist denies connection
Driver dies after slamming into 18-wheeler's trailer on US-59
Woman shot in the shoulder during robbery set up in SW Houston
Prepare for a major closure at I-69 and 610 West Loop this weekend
Officers escort body of corporal killed in ambush to funeral home
More TOP STORIES News