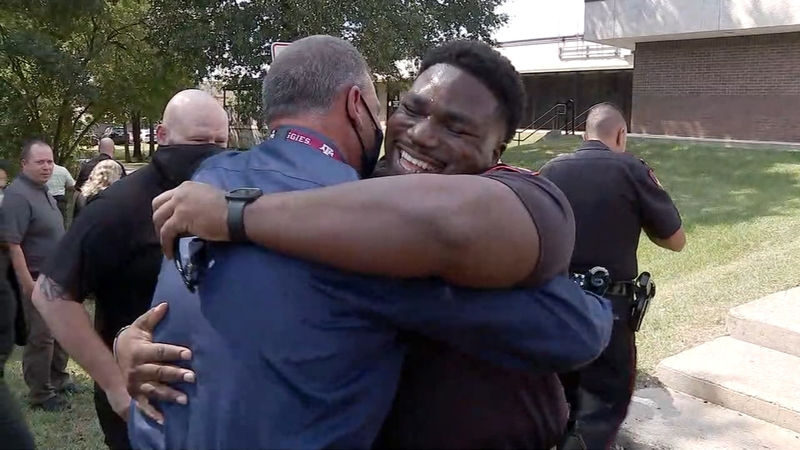 HOUSTON, Texas (KTRK) -- A Harris County Precinct 4 Deputy Constable, who was hospitalized after being shot while trying to make an arrest in north Harris County, returned to his patrol duties on Monday.

Deputy Christopher Hendrix was ambushed and shot by a suspect while responding to a disturbance call in the 13000 block of Ella Boulevard at the Cranbrook Apartments on July 7.


Authorities said this was the second time the deputies were responding to the location for a domestic violence call when things turned physical between deputies and the suspect. During the altercation, the suspect opened fire with a rifle, injuring Hendrix.

READ MORE: Man who was shot by deputies was in domestic dispute with brother

Hendrix was hit in the lower abdomen area and underwent surgery at Memorial Hermann in The Woodlands. He was released from the hospital on July 10, but spent the past three months undergoing other surgeries and rehabilitation procedures.

LISTEN: Deputy Chris Hendrix calls out to other deputies after being shot
EMBED More News Videos

"Shots fired. Shots fired." Hit play to listen to the law enforcement audio of when Deputy Chris Hendrix called after being shot.

On Monday, Precinct 4 Constable Mark Herman welcomed Hendrix back to work with a homecoming celebration.

"From the day that I got shot, I received countless emails, text messages, and everything like that." Press play to watch the warm welcome Pct. 4 Deputy Chris Hendrix received when he returned to work after being ambushed and shot while responding to a disturbance in north Harris County.

"What you did (that night) was heroic," Herman said to him. "You don't get to see these kinds of celebrations often."

"Thanks for all of your prayers," Hendrix said to the other deputies and officers gathered to welcome him. "Without them, I wouldn't be here right now."

"I'm excited to get back out there," he added.