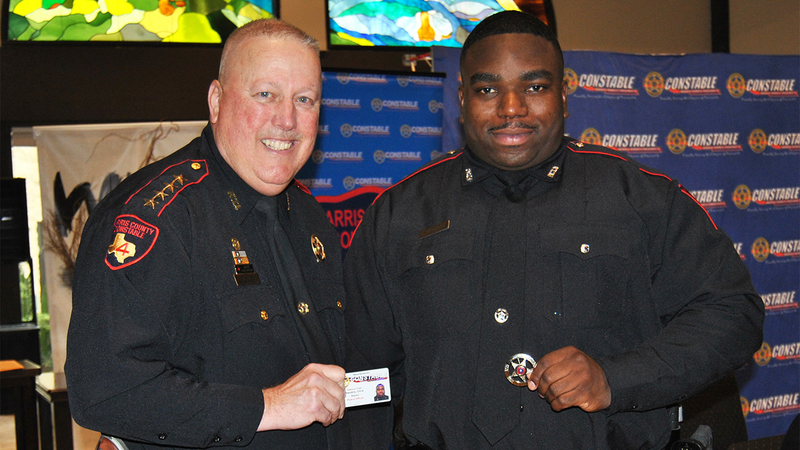 A Harris County Precinct 4 Deputy Constable is expected to be okay after authorities say he was shot while trying to make an arrest in north Harris County.

According to authorities, the shooting happened around 12:03 a.m. Tuesday in the 13000 block of Ella Boulevard at the Cranbrook Apartments.

Our shot Deputy has been rushed to Memorial Hermann hospital in the Woodlands. Constable and staff On the way there pic.twitter.com/weB9FWaVvc

Authorities say this was the second time the constables were responding to this location for a domestic violence call when things turned physical between constables and the suspect. During the altercation, the suspect opened fire with a rifle, injuring one of the two constables.

The injured constable was pulled out of the scene to safety, while other constables shot back at the suspect. The suspect barricaded himself in the apartment and a SWAT team was then called out for help.

LISTEN: Deputy Chris Hendrix calls out to other deputies after being shot
EMBED More News Videos

"Shots fired. Shots fired." Hit play to listen to the law enforcement audio of when Deputy Chris Hendrix called after being shot.

Deputy Chris Hendrix was hit in the lower abdomen area and was taken to Memorial Hermann in The Woodlands, where he underwent surgery. According to his LinkedIn page, Hendrix has been working with precinct 4 for about five months.

Waiting with Deputy Hendrix’ Mother & Sister in waiting room while he is in surgery after being ambushed and shot by a suspect while responding to a disturbance call earlier this morning. Praying to god for a Successful surgery! pic.twitter.com/wmeLgN5dwh

While the name of the suspect is not known, a spokesperson for the sheriff's office said the suspect struggled with mental health issues.

Deputy Hendrix is out of surgery and doctor says it was a success !
He is currently admitted to the hospital in stable condition where he will recover.