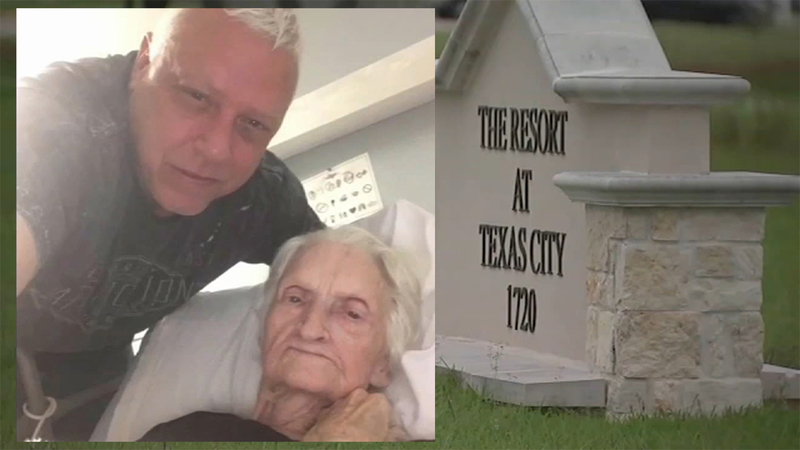 Man who lost mother to COVID-19 mourning in quarantine

TEXAS CITY, Texas (KTRK) -- On Friday, the Galveston County Health Department announced 83 people, including patients and employees, tested positive for COVID-19 at a Texas City nursing home. The next day, one of the patients died.

Peggy Smith, 87, had Alzheimer's disease, according to her son. He hadn't been able to see her since The Resort at Texas City, like other nursing homes and assisted living centers, was closed to visitors as a precaution against the spread of the virus to a vulnerable population.

"I was told by my sister to get over there fast because she didn't have much time left," said Sam Quinn, Smith's youngest child. He said his sister stayed outside the room concerned about the virus. "One of the nurses told me I should be okay in the room because my mother didn't have it."

Quinn said he wore a mask and stayed in the room for five hours.

"Her breathing was so slow," he recalled. "She opened her eyes once, and it was like she was saying something and I said, 'Mom, what did you say?' and it was like a little tear came out of her eye. I think she knew I was there."

He said he took off the mask to kiss his mother on her forehead several times. He then left but said an employee ran after him.

"He told me, 'I just want to let you know your mom did come back positive for the coronavirus,' and I got upset immediately," recalled Quinn.

Quinn is now in self-quarantine while mourning his mother who he said called him her favorite child.

"I didn't have a problem with the 'no visitor' policy," said Quinn. "That's the reason I didn't argue with them about not being able to see my mother while the coronavirus tragedy was going on. I thought all those older people with health problems were vulnerable."

"She loved me," he said from his home on Sunday. "This quarantine means there's no one to console me while I grieve."

He posted a tribute to his mother on his Facebook page and said the comments he's received are comforting.

"She was a wonderful mother who took me to games, was involved in everything I did as a kid," he said.

The health department is now banning nursing home employees from working at different facilities as part-time workers in an effort to stop the transmission of the virus from one facility to another.

The county health director doubts there will be a way to determine how the virus entered The Resort at Texas City. There will be no funeral for Smith, but after the 'stay at home' order is lifted, there will be a memorial service for her.

When asked what he would say to his mother now, Quinn responded with a promise: "Mom, I going to honor you and make you proud from heaven."