KTRK
By Nick Natario
SUGAR LAND, Texas (KTRK) -- Frustration is mounting in the Riverstone community in Sugar Land, where residents are facing more than a feral hog nuisance. They are facing a burden and possibly a danger.

On Monday morning, neighbors woke up to nearly a half dozen lawns torn up. They say they don't feel like they are getting enough help from the homeowners' association.

"It basically looks like somebody came in with a trencher and just went nuts in the front yard," said Ken Delling, a Riverstone resident.

"We had a hog at the back of our fence, and so the dog was naturally barking at the hog being scared," recalled Claudia Figoli, another resident. "And the hog came and charged at our fence."

To get help, neighbors say they've reached out to the Riverstone HOA.

"Each of us pay our yearly dues and I was just asking if a portion of that will be used to help do something. To be proactive about it," said Delling. "And we're pretty much being told no."

Riverstone HOA says it is a no when it comes to traps.

"The traps can't be placed on non-HOA property, which is where these hogs are coming in," said Jaime Villegas, the Riverstone general manager. "On HOA property, they would have to be pre-baited, so that would have the hogs come into your neighborhoods first. So it's a catch-22 on that."

The move is adding barriers to the neighborhood. Last year, the HOA says it added 12,000 feet of fence.

Each year, Riverstone says the hogs are costing the community more than $100,000. It's a feral problem that neighbors fear is getting worse.

"We're getting scared walking our child around, playing around, and also walking our dogs around," said Figoli.

Experts say hogs are active this time of year. 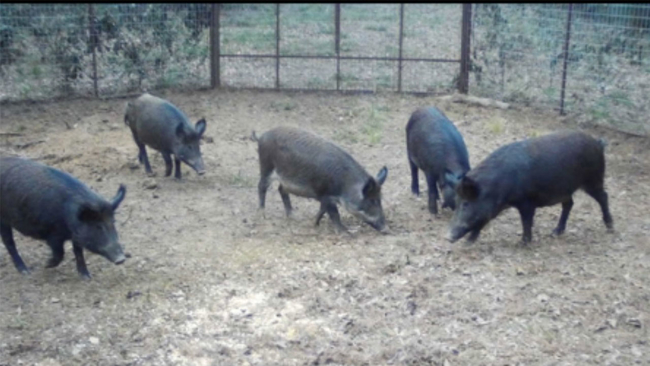 SpaceX launch: A look ahead at today's liftoff
Here's when a round of storms could impact us Wednesday
Missing elderly woman with dementia may be with dog
SpaceX/NASA plan historic launch of American astronauts
How to watch Wednesday's NASA/SpaceX launch
Show More
Protest for George Floyd turns violent in Minneapolis
Protesters to Minneapolis police: 'He begged you for his life'
Check Houston traffic map for current road conditions
Mexico reports more than 500 coronavirus deaths in one day
SpaceX vision goes well beyond space station
More TOP STORIES News