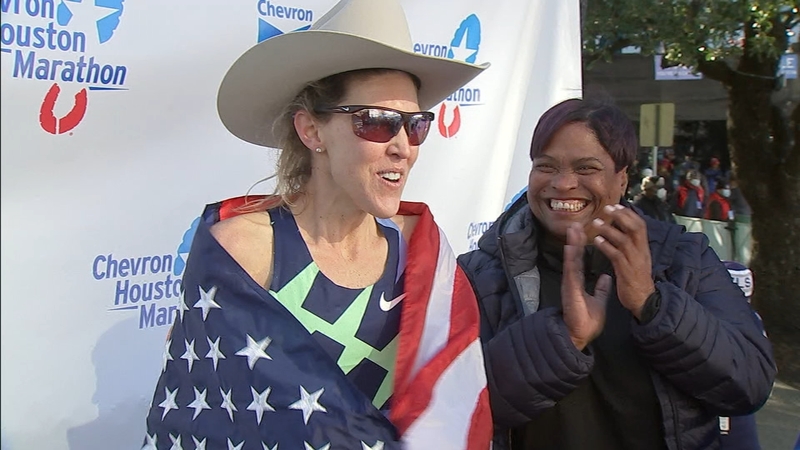 HOUSTON, Texas -- The 50th anniversary Chevron Houston Marathon was one for the books. Runners were welcomed back to the in-person event after the race was virtual in 2021.

And plenty of records were set!

Congrats to James Ngandu and Kiera D'Amato, the Chevron Houston Marathon men’s and women’s winners. James placed first with a time of 2:11:03 in his debut marathon. Kiera broke the American women’s record with a winning time of 2:19:12.https://t.co/JPPPldOoMN pic.twitter.com/y2qrw6vTk6

One of those records belongs to American Keira D'Amato, who finished first in the women's field with a marathon winning time of 2:19:12. She shattered the previous U.S. record set in 2006, beating the time by a full 30 seconds.

"I keep checking it to make sure that that's what I ran," she said soon after the win. "I just can't believe this! I'm really tired, but I'm really, really happy!"

The 37-year-old mother of two sailed across the finish line far ahead of the field. Greeted there by her family, D'Amato immediately welcomed huge hugs from her children, Tommy, age 7, and Quinn, age 5.

An interview I won't soon forget.

"They see me day in and day out leave for a run and come back an hour or two later, so they've been part of this journey and part of the sacrifice," D'Amato said. "When I crossed the line and they were there, oh man, it was just one of the happiest moments of my life."

With a record-breaking time of 2:19:12, Keira D'Amato is the Chevron Houston Marathon women's winner.

Tommy joined his mother during a post-race live interview on ABC13. "This is so cool, because it's kind of like Mom is famous, and it's cool to have a famous mother!"

She said, "Age is just a number. It just doesn't even matter how old you are, you can chase your dreams. I'm just so fortunate to have a family that supported that."

D'Amato took a seven-year break from the sport but is now among the top marathoners in the U.S. A four-time All-American at American University, D'Amato briefly ran post-collegiately until ankle surgery "ended" her running in 2008.

"It's so special, to think that this dream was 'gone' a decade ago, and somehow I just believed," D'Amato explained.

In 2016 when her husband, Anthony, deployed with the Air National Guard and D'Amato was left to care for their two toddlers, she took it up again to get some "me time." In March 2017, she ran her first marathon (3:14:54) seven months after giving birth, and by 2018 was fast enough to qualify for the U.S. Olympic Team Trials - Marathon, where she finished 15th.

Her real breakthrough came in 2020 when she ran 2:22:56 in the Marathon Project, making her the seventh-fastest U.S. woman in history.

D'Amato works full-time as a real estate agent, which she says takes the pressure off of her running.

"The community came out and supported so much," D'Amato thanked the spectators. "Just hearing the people cheer -- they didn't even know who I was but they were out there cheering on their lawns and everything. I'm just so appreciative."