Districts with high percentage of virtual students struggling most

HOUSTON, Texas (KTRK) -- A record-setting number of southeast Texas students are failing classes amid the chaos brought on by the pandemic, and an ABC13 investigation found school districts with a high percentage of virtual learners are struggling the most.

At the Goodman household, kindergarten student Eddie and Alan, who's in the third grade, get plenty of support.

Not only is their mom, Katy, able to make sure they stay on task and at grade level, their grandmother, who is a retired teacher, also pitches in. Yet even for them, Goodman said it's been difficult home-schooling.

How did your child's school district do during the first grading period.

"I think it's been a really tough year for everyone," said Goodman. "Specifically in terms of school, how to adjust, how to get information you need, and things keep changing constantly. It's hard to keep up. Obviously, all families' experiences are different, but there's some commonality to those experiences that everyone's had - kind of [a] ride ... the 'Corona-coaster,' ride the roller coaster of this year."

That roller coaster hasn't prevented the Goodman children from staying on track, but the year has been a disaster for many other children.

Here's how the first semester ended for some of our school districts, according to data they provided to Eyewitness News. (Note: Many districts don't count 'Fs' earned before the third grade.) 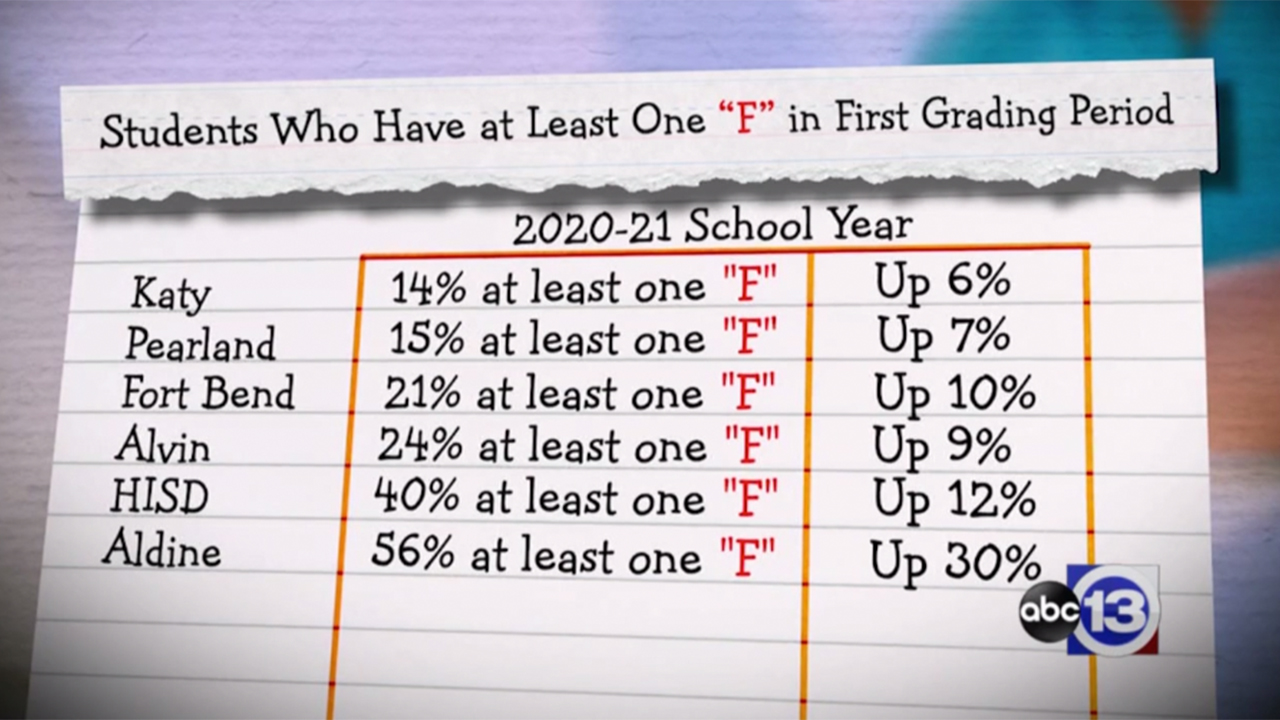 NOTE: Some school districts, inlcuding HISD, did not include early primary grades in their enrollment or F numbers.

Aldine superintendent Dr. LaTonya Goffney said they've already put remediation programs into place, such as Saturday classes and after-school tutorials. The opportunity to make-up failing classes this summer will be on campus, not online.

"They're designing a learning experience where students can recover the learning that they missed out on in the fall, or at some point, but they're also going to be exposed to exercises and doing different things in a different way. We want it to be fun and not feel punitive," said Goffney, who said Aldine is still working out the details of the summer school plans.

In Alvin, the district mandated that all failing students come back to campus after their first semester grades came in, which superintendent Carol Nelson said their families embraced.

She said it has turned around many poor performers. This summer, the district is hiring retired teachers to help.

"We've increased the course selection this summer for our students who have failed, but also for those students who are on the borderline of failing, or maybe have fallen behind academically," said Nelson. "We're encouraging all of them [to attend summer school] as well."

Already this second semester, there were more virtual study halls, in-person after-school tutorials, and even an academic boot camp during spring break. This year's summer school classes will be longer than usual each day.

Interim Superintendent Dr. Grenita Lathan, who announced in March that she would be leaving the district to pursue a new journey in Missouri, said she'd prefer to get more students back on campus, but they're going to meet students where they are.

"High school students can actually take multiple classes as it relates to credit recovery so they're able to recover courses that they failed previously, and they can take multiple courses," said Lathan. "Elementary and middle school students (curriculum), of course, is geared toward the areas where they need additional support, normally that's in reading, math, social studies or science."

Goodman, whose kids attend school in HISD, said she knows schools have a lot of academic ground to cover, but she also hopes plans moving forward take into consideration the angst families have been through.

"They have been through so much trauma and stress this year that what they really need is a lot of support and love and caring from these institutions that are supposed to be part of the safety net for them," said the mom. "I hope that that's some of the priorities, to make sure kids are getting what they need in terms of support and safety before we start worrying about test scores."