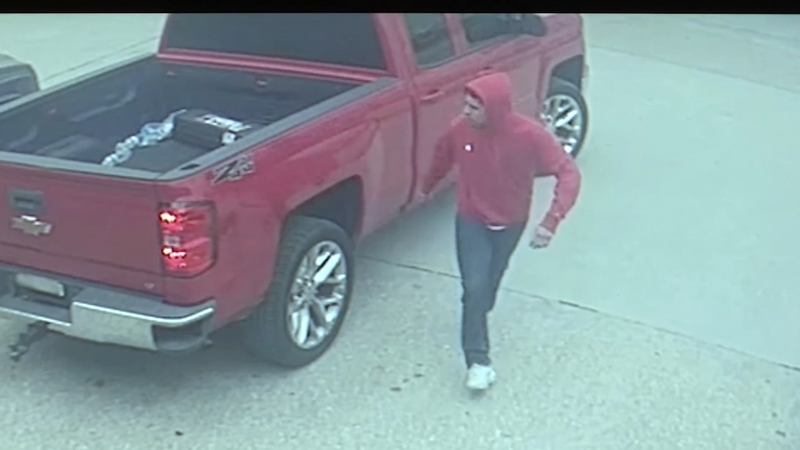 HOUSTON, Texas (KTRK) -- The receptionist of an auto enhancement shop was pistol whipped by a man demanding money on Monday morning.

Exclusive Details on the Eastex Freeway Service Road near Olana Drive had only been open for an hour and a half when the owner said a red Chevy truck backed up to their front door. She said it did not strike anyone as unusual because it looked like the trucks they work on.

Surveillance video captured a man in a hoodie get out of the truck without a license plate on the back and used his sleeve to open the front door.

The man pulled a gun out of his waistband before he went to the back side of the counter and pistol whipped the receptionist who was in the lobby alone Monday morning. After hitting her several times, he ran out of the front door. He did not take anything.

"What about if he hit her hard and she could have lost her life?" Sanchez said. "Thank God he didn't pull the trigger, but he had a gun with him."

The woman went to the hospital where she got staples in her head and learned she had several broken fingers from trying to block her face from being hit.

Sanchez said the same man went to their shop last week and acted suspicious. At the time, both she and her husband were in the lobby with the receptionist and other customers. Nothing happened.

"He was just asking weird questions that didn't make sense," Sanchez recalled. "When I asked him what year his truck is it, because he wanted a lift, he didn't know what to say so he just walked out. I told my husband I'm like, 'Something about him I don't like.'"

She is hoping someone will recognize the man caught on her surveillance cameras and turn him in to police.

"We work so hard for what we have for them to just come in here and think they can get away with anything and it hurt innocent people," Sanchez said. "She got really hurt."