ABC News presents live coverage of Joe Biden's inauguration today. Watch on TV, our website or on our streaming apps for Apple TV, Android TV, Fire TV and Roku.
KTRK
WASHINGTON -- The world's eyes will be on the nation's capital as President-elect Joe Biden is sworn into office as the country's 46th president. Here's a look at everything we know about Biden's inauguration ceremony and how to watch the event live.

When is Inauguration Day 2021? What time is the inauguration?

Per the Twentieth Amendment to the U.S. Constitution, Inauguration Day is set for January 20 every four years -- that's a Wednesday in 2021.

The outgoing president's term ends at noon local time on the 20th. Biden is expected to take the oath of office at noon Eastern time.

The theme of this year's inauguration is "America United," an issue that's long been a central focus for Biden but one that's taken on added weight in the wake of the violence at the U.S. Capitol earlier this month. The Presidential Inaugural Committee said that the theme "reflects the beginning of a new national journey that restores the soul of America, brings the country together, and creates a path to a brighter future.

From Reagan to Biden, here's a look at 40 years of United States presidential inaugurations.

How to watch the inauguration live

ABC News will present live coverage of the inauguration on Jan. 20 beginning with "Good Morning America." You can watch live coverage throughout the day on television, here on our website or on our streaming apps for Apple TV, Android TV, Fire TV and Roku.

The "Celebrating America" primetime event will air from 8:30-10 p.m. ET/PT. You can watch it here on ABC or stream it on our connected TV apps. You can also watch "Our White House: An Inaugural Celebration for Young Americans" on our website, mobile app and CTV apps beginning at 10 a.m. ET Wednesday.


Who's performing or participating in the inauguration ceremony?

Lady Gaga and Jennifer Lopez will both perform at the inauguration, with Gaga singing the national anthem and Lopez giving a musical performance.

The invocation will be given by the Rev. Leo O'Donovan, a former Georgetown University president, and the Pledge of Allegiance will be led by Andrea Hall, a firefighter from Georgia. There will be a poetry reading from Amanda Gorman, the first national youth poet laureate, and the benediction will be given by Rev. Silvester Beaman of Bethel African Methodist Episcopal Church in Wilmington, Delaware.

Additionally, the committee announced it will celebrate a number of the everyday Americans who have stepped up in their communities, including Anthony Gaskin, a UPS driver from Virginia, Mackenzie Adams, a kindergarten teacher from Washington state, and Sarah Fuller, the first woman to play and score in a Power Five college football team.

Which Bible will Biden, Harris use when they are sworn in?

Biden plans to use the same family Bible he has used twice when swearing in as vice president and seven times as senator from Delaware.

The book, several inches thick, and which his late son Beau also used when swearing in as Delaware attorney general, has been a "family heirloom" since 1893 and "every important date is in there," Biden told late-night talk show host Stephen Colbert last month. 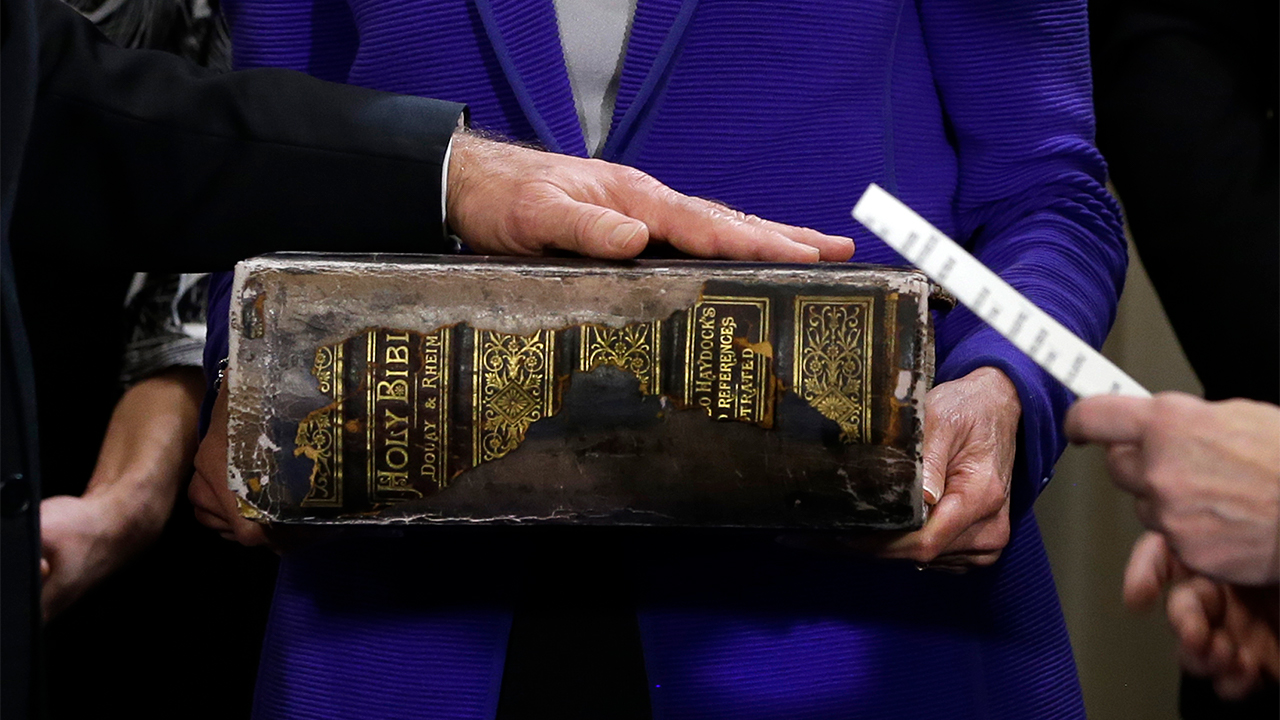 FILE - In this Sunday, Jan. 20, 2013 file photo, Vice President Joe Biden places his hand on the Biden family Bible as he takes the oath of office.

Biden's use of his family Bible underscores the prominent role his faith has played in his personal and professional lives - and will continue to do so as he becomes the second Catholic president in U.S. history.

Harris will use a Bible owned by a close family friend and one that belonged to the late Supreme Court Justice Thurgood Marshall. Harris has spoken of her admiration of Marshall, a fellow Howard University graduate and trailblazer in government as the high court's first African American justice.

"When I raise my right hand and take the oath of office tomorrow, I carry with me two heroes who'd speak up for the voiceless and help those in need," Harris tweeted Tuesday, referring to Marshall and friend Regina Shelton, whose Bible she swore on when becoming attorney general of California and later senator.

When I raise my right hand and take the oath of office tomorrow, I carry with me two heroes who’d speak up for the voiceless and help those in need: Justice Thurgood Marshall and Mrs. Shelton. https://t.co/CWyN2EA7uY

Harris, who attended both Baptist and Hindu services as a child, worships in the Baptist faith as an adult.

Which former presidents will attend the inaugural ceremony?

President Donald Trump announced in early January that he intends to skip Biden's inauguration. Traditionally, the incoming and outgoing presidents ride to the U.S. Capitol together on Inauguration Day for the ceremony, a visible manifestation of the smooth change of leadership. Vice President Pence will attend President-elect Joe Biden's inauguration, a person familiar with his decision told ABC News.

Former Presidents Barack Obama, George W. Bush and Bill Clinton will be there to stand witness to the rite of democracy. The only other living president, 96-year-old Jimmy Carter, who has spent the pandemic largely at home in Georgia, will not attend but has extended "best wishes" to Biden.

President-elect Joe Biden on Dec. 8 promised to distribute a coronavirus vaccine to 100 million people during the first three months of his incoming administration, pledging "100 million shots in the first 100 days." He also pledged to promote masking and get kids back to school.

After the inauguration, the Bidens, Harrises, Obamas, Bushes and Clintons will lay a wreath at the Tomb of the Unknown Soldier in Arlington National Cemetery. It will be one of Biden's first acts as president, and a show of bipartisanship at a time when the national divide is on stark display.

What will security look like in Washington for the inauguration?

The inauguration will be held on the same risers in the same spot at the U.S. Capitol where a violent, pro-Trump mob descended earlier in the month. But the two events aren't even comparable from a security standpoint, said Michael Plati, U.S. Secret Service special agent in charge, who is leading the inauguration security.

The inauguration is designated as a "national special security event," which clears the way for communication, funding and preparation between multiple agencies in Washington, like the Capitol Police, Pentagon, Homeland Security and District-area police. Other such events are the State of the Union, the Super Bowl and the Democratic and Republican National Conventions.

Law enforcement officials never go into too much detail about security so would-be attackers aren't tipped off. But Plati said they've taken into account the siege: "It's a poignant reminder of what can happen.

The FBI is warning of plans for armed protests at all 50 state capitals and in Washington, D.C., in the days leading up to President-elect Joe Biden's inauguration, stoking fears of more bloodshed after last week's deadly siege at the U.S. Capitol.

The outgoing president traditionally attends the inauguration to symbolize the peaceful transfer of power. But Trump, who falsely claimed that the election was riddled with fraud, has refused to be there. Vice President Mike Pence plans to attend.

Forget a parade with crowds of people cheering on the new president and vice president. And there will be no inaugural balls for Biden, Harris and their spouses to dance the night away.

Planners had originally sought to retain some time-honored aspects of a normal inauguration, just less crowded and within the boundaries of COVID-19 protocols. But in the wake of the violent Jan. 6 mob attack on the Capitol by Trump supporters, all semblance of normality might be gone.

President-elect Joe Biden will take office Wednesday at a time of national crisis with the nation's capital a city on edge.

Downtown Washington D.C. has been turned into an armed camp. The National Mall is sealed to the public and the Washington Monument has shut down. 21,000 National Guard troops will be on the job on Jan. 20, alongside D.C. police and multiple federal law enforcement agencies.

Like their predecessors, Biden and Harris will take their oaths of office outside the Capitol Building. Jennifer Lopez will perform and Lady Gaga will sing the national anthem. Biden, according to the inauguration website, will give a speech to the nation, "laying out his vision to defeat the pandemic, build back better, and unify and heal the nation."

Afterwards, Biden and Harris will complete the traditional "Pass in Review" inspection of troops from all service branches, a ritual that symbolizes the peaceful transfer of power to a new Commander in Chief.

Biden, first lady Jill Biden, Harris and second gentleman Douglas Emhoff will later visit Arlington National Cemetery to lay a wreath at the Tomb of the Unknown Soldier. They will be joined by former presidents and first ladies Barack and Michelle Obama, George W. and Laura Bush, and Bill and Hillary Clinton. 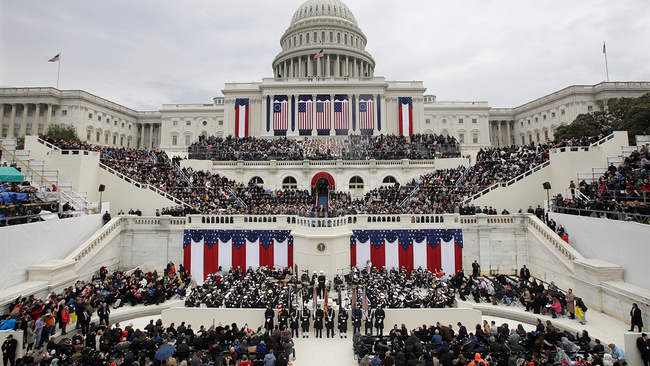 Presidential oath of office: Here's what it says for inauguration 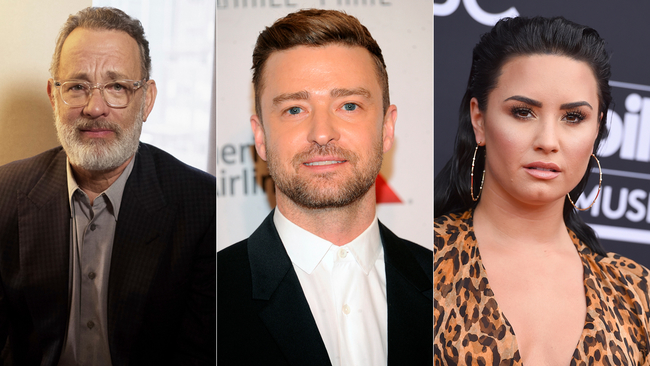