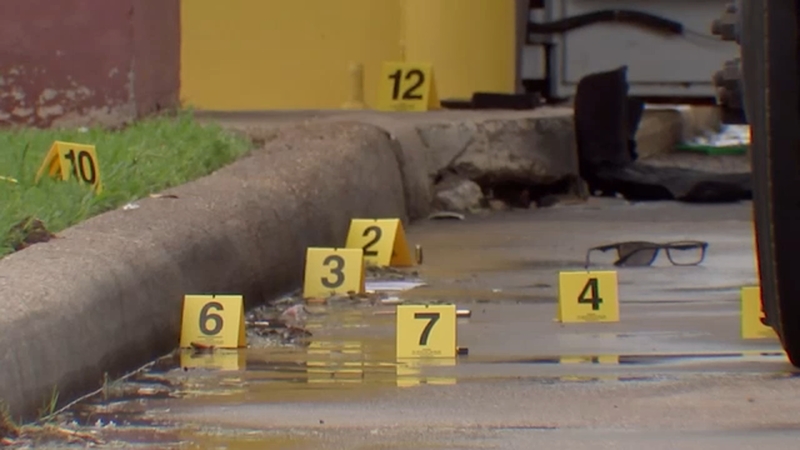 HOUSTON, Texas (KTRK) -- An armored truck guard was shot in the face by a person trying to rob him at a northeast Houston bank branch, leading to a dangerous shootout involving another guard.

Houston police said the shots were fired Friday afternoon at a Wells Fargo branch in the area of Eastex Freeway and Tidwell.

Robbery Detectives are en route to a Robbery/Shooting of a Security Guard at a Bank in the 9300 Block of the Eastex Freeway. #hounews

According to police, a two-person Brinks armored truck crew was servicing an ATM. One guard was inside the vehicle while the other was working with the machine.

At some point, the guard inside the truck noticed his colleague down on the ground and someone taking money, police said.

It was then that the guard got out of the truck and exchanged gunfire with the suspect.

The suspect was able to escape the scene with the cash. He took off in a getaway vehicle. Police described the suspect as a Black male who is 5'2" and was last seen wearing black shoes, black sweatpants and a green shirt. It's unknown if the suspect was hit or injured by the gunfire.

As for the guard, he was shot in the face and taken to Harris Health Ben Taub Hospital, where he was listed in stable condition.

"He's in stable condition, but I would definitely encourage everybody to keep him in their prayers," said Assistant Chief Yasar Bashir with the Houston Police Department.

Bashir said the driver put his life on the line for his colleague.

"To me, its a very dangerous job. When you have that much money, you're always going to be a target. So that's something they always prepare for, something like this. I'm really glad the driver was alert. He put his life on the line and engaged with the suspect so I'll commend him for that," said Bashir.

The FBI and ATF are assisting with the investigation. Anyone with information is asked to call the Houston Police Department Robbery Division at 713-308-0700.