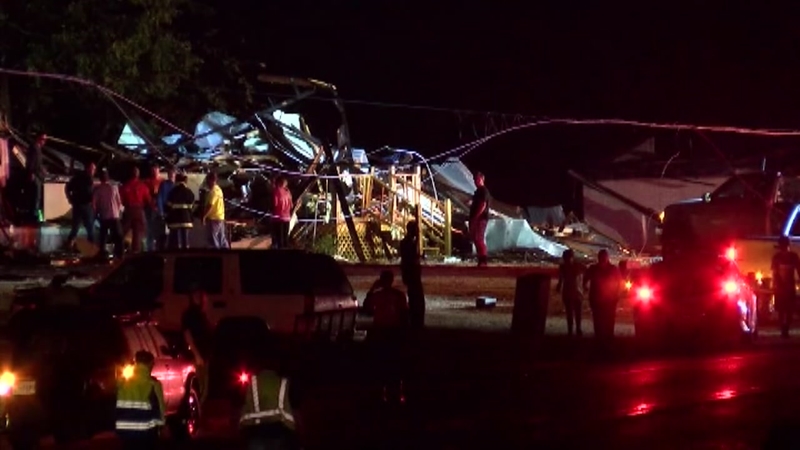 ROSALIE, AL -- A suspected tornado killed three people in Alabama as a line of severe storms moved across the South overnight, authorities said.

Emergency officials say 2 killed by severe storms in Tennessee, raising death toll across the South to 5.

The three who died were all in a mobile home in the northeastern Alabama community of Rosalie, Jackson County Chief Deputy Rocky Harnen told The Associated Press early Wednesday. Another person in the home was critically injured, Harnen said.

Harnen also said there were a number of other injuries and estimated that 16 to 20 structures in the county have been destroyed. He could not give an exact number of injuries. The suspected tornado affected an area of homes and businesses that covered nearly half a mile, Harnen said.

Harnen also said authorities were searching door to door before dawn Wednesday for any other damage.

Tornadoes and hail were also reported Tuesday in Louisiana and Mississippi. In Mississippi, the National Weather Service in Jackson said late Tuesday that it had counted six confirmed tornadoes so far in the areas of the state it monitors.
Related topics:
weatheralabamatornadou.s. & worldsevere weather
Copyright © 2022 by The Associated Press. All Rights Reserved.
TOP STORIES
We have a cold and damp night ahead
High school student attacked in his family's driveway in Richmond
Winter blast felt across Texas
Man killed in incident authorities believe stemmed from road rage
Major crash blocks southbound lanes of I-45 in The Woodlands
Alvin votes no on 'sanctuary city for the unborn' ordinance
Opening of adult store in Missouri City on hold after zoning issues
Show More
TxDOT crews prepared as temperatures continue to drop
Burglar caught on camera hitting luxury apartment building
Digging into the process of rebranding Sugar Land Skeeters
Adele postpones Vegas residency due to COVID among crew
Man killed during attempted robbery of woman he met online, HPD says
More TOP STORIES News