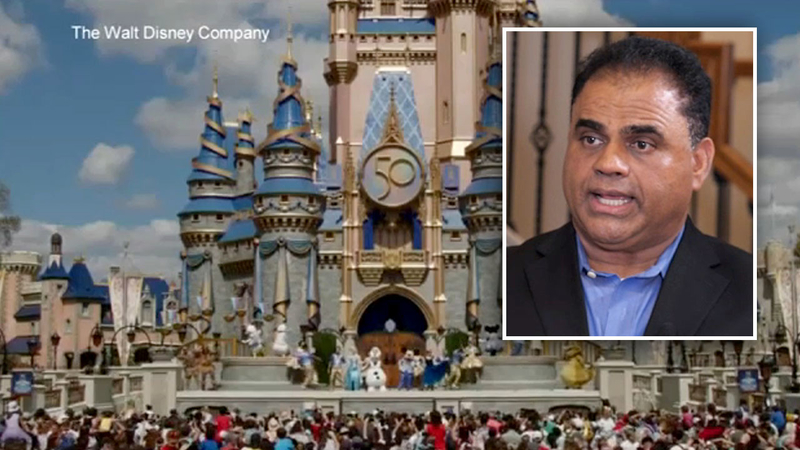 RICHMOND, Texas (KTRK) -- It's a small world after all.

So small that Walt Disney World's conflict with Florida has a Houston-area leader making a big pitch: bring the Magic Kingdom to Texas.

In the midst of a Florida bill to revoke a special self-governing status from the sprawling 39-square-mile Disney World complex, Fort Bend County Judge KP George fired off a series of tweets Thursday to entice the world-famous attraction to relocate to the 885-square-mile county.

"From Timone & Pumba to Tinker Bell, Disney Characters are as diverse as Fort Bend County families. I welcome @Disney to visit Fort Bend County as your next destination while you face attacks from the modern-day political extremists like (Florida governor) @RonDeSantisFL," George tweeted, along with a copy of a letter addressed to Disney CEO Bob Chapek.

From Timone & Pumba to Tinker Bell, Disney characters are as diverse as Fort Bend County families. I welcome @Disney to visit Fort Bend County as your next destination while you face attacks from the modern day political extremists like @RonDeSantisFL. pic.twitter.com/UMtvN4Cudj

Florida just passed a bill to eliminate Disney World's special taxing district, saying it provides an unfair competitive advantage over other tourist attractions. But critics say it's due to Disney's comments against the state's so-called "Don't Say Gay" bill, which bars instruction on sexual orientation and gender identity in kindergarten through third grade.

If this pitch from George sounds familiar, it's because he's made similar pitches to equally sized, equally valuable companies that have either expressed a departure from their current locations or are embroiled in controversy.

In 2020, for example, George pitched Fort Bend County to Elon Musk when the Tesla Motors CEO threatened to pull the company's factory and headquarters out of California.

Tesla CEO Elon Musk said on Twitter Saturday morning his company will be suing Alameda County over the public health order that is prohibiting certain businesses and manufacturing facilities from resuming operations amid the coronavirus pandemic.

Simultaneous with his appeal to Disney, the county leader also pitched social media platform Twitter to think Fort Bend for its business needs, citing similar attacks against it from Florida.

More importantly, you know politics, putting it aside," George said. "We are always looking for businesses to come to our county.