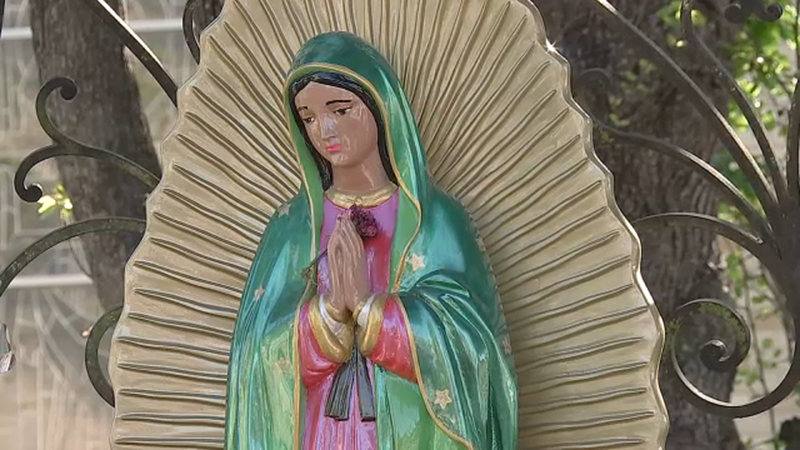 HOUSTON, Texas (KTRK) -- A statue of Our Lady of Guadalupe that was found vandalized outside of a southeast Houston church in January was finally replaced Sunday morning.

Queen of Peace Catholic Church held a replacement statue inauguration in the 3000 block of Telephone Road at 9 a.m., honoring the new Virgin Mary as parishioners adorned the area with flowers.

The video above shows the new statue living on top of a few steps outside in the church's green space.

According to parishioners, the statue was hit by at least six bullets back in December of 2020, leaving holes in the venerated object.

Witnesses said the person responsible is a man who was wearing a red suit and a black hat.

After the vandalism, the statue was in the process of being restored. In this video from Susanna Rozelle, Our Lady of Guadalupe was adorned with her symbolic crown.

"I just think it's something evil, you know? It's something that's not good. We were scared because it's right across the street," said Ruby Garcia, who lives in the area.

Garcia's mother cleaned the previous statue every other day and said she was extremely upset.

"It's just ridiculous. The first thing I thought about, I said, 'Well, what if someone had been there and gotten shot accidently because some stupid person passed by shooting it?'" wondered Irene Garcia, another resident of the area.

Anyone with information on the suspect is urged to contact authorities.

The site, located just feet away from Telephone Road, is visited often by parishioners and others in the area for prayer and inspiration. 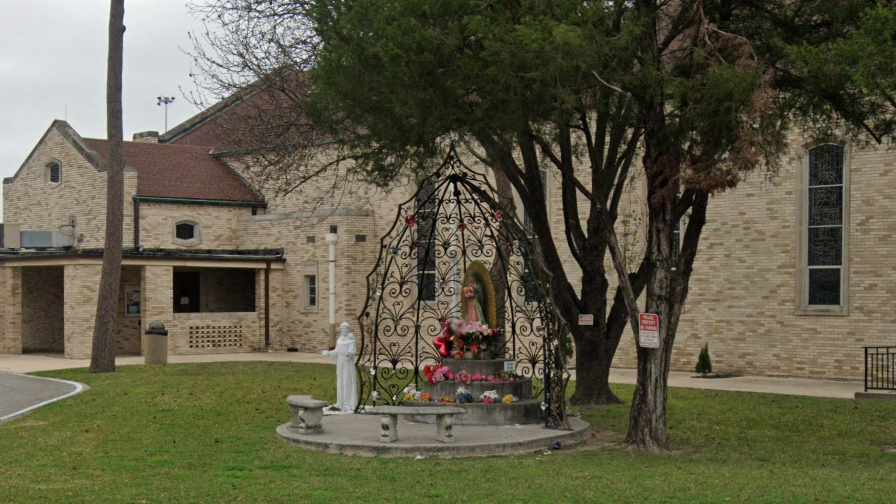 Queen of Peace Catholic Church was established in 1945. It wasn't clear when the statue was installed.

Our Lady of Guadalupe traces its roots back to 1531 when an apparition of Mary, the mother of Jesus, appeared five times in Mexico, according to historical accounts. A cloak containing an image of her is located at the Basilica of Our Lady of Guadalupe in Mexico City and is one of the most popular pilgrimage sites for the Catholic faithful.
Report a correction or typo
Related topics:
religion & spiritualityhoustonreligionstatuecatholic churchchurchshootingvirgin mary
Copyright © 2021 KTRK-TV. All Rights Reserved.
CHURCH
Houston's oldest African-American church still changing lives
Days after shutting down church due to virus, pastor dies of COVID
Former pastor sentenced to 17 years for molesting teen for years
New councilmember is making illegal dumping her mission
TOP STORIES
3 CDC studies fuel universal masking guidance for schools
Driver who hit deaf woman ran off covered in blood, HPD says
'The View' hosts test positive for COVID moments before VP interview
Another cool start, but change is coming
11-year-old boy knocks on doors to alert neighbors of massive fire
COVID-19 cases among students and staff drop 35% in area schools
Trump calls for election audit legislation in Texas
Show More
Biden urges booster shots following CDC endorsement
Time running out for Harris County COVID vaccine incentive program
Woman's new boyfriend shot to death by ex, deputies say
Woman hit and killed while checking flat tire in Meyerland
Man wanted in murder of ex after she's found shot multiple times
More TOP STORIES News