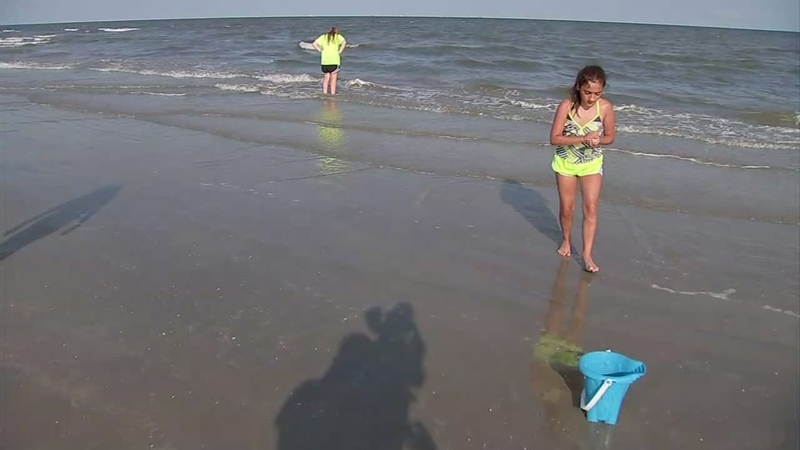 Cases of Vibrio, commonly known as "flesh-eating bacteria" have made some beachgoers more aware.

"I've never had concerns, but after reading and hearing about the guy who lost his leg, I had some concerns coming down today," Lauren Sieg said.

Vibrio is contracted through an open wound, or ingested through raw seafood.

Get your questions about 'flesh-eating bacteria' answered
We know you have questions. We want to get you the answers.

"It's not stopping us from swimming," mother and beach visitor Tammy Dodd said.

Doctor John Butler with Memorial Hermann Southwest Hospital recommends wearing water shoes and avoid the water if you have a cut. If you do get a cut in the water, address it immediately with soap, antibiotic ointment and a waterproof Band-Aid. He also says to watch it carefully in the days to come for redness, swelling and see a doctor if it gets worse.

"I do think it's safe to go out into the water particularly going into the gulf and enjoy yourself. But I think you need some basic common sense preventative measures," Butler said.

RELATED: Everything you need to know about flesh-eating bacteria

Those with a compromised, weakened immune system are more at risk.

Cases of losing limbs or life are rare, according to the Health Department.

"What a lot of people don't seem to understand is Vibrio is present in salt and brackish water anywhere you go. So if you've ever been to the Gulf of Mexico or either coast of the U.S. you've probably been exposed to this bacteria, and you probably didn't have a negative reaction," Scott Packard, with the Galveston County Health District said.

GCHD says there have only been two confirmed cases so far this year compared to more the past three years.

The Texas Beach Watch Advisory does not include Vibrio. Swim sites are tested for Enterococcus, a bacteria common in flood water which spikes after a heavy rain. An advisory is issued if it's above EPA levels for safe swimming, but the beaches aren't closed.

"I checked my daughter and no cuts, we are good," Tammy Dodd said.

Information from the Galveston County Health District:
Galveston County advisories are indicated with a sign on the beach and online at TexasBeachWatch.com and GCHD.org.

Like Vibrio, most healthy people will not be affected by Enterococcus, although people with pre-existing health conditions, or open sores or wounds, are more susceptible to infection. Bacteria can enter the body through a break in the skin or by being ingested.

If you cut yourself while in untreated water anywhere (examples: ocean, lake, pond, river, Gulf of Mexico), you need to immediately leave the water and thoroughly clean the wound. You then need to monitor the wound and see a doctor if there's any sign of redness or swelling. If you notice similar symptoms anywhere on your body, especially in a sore or wound, you need to see a doctor immediately.

Learn more about Vibrio at CDC.gov/vibrio.