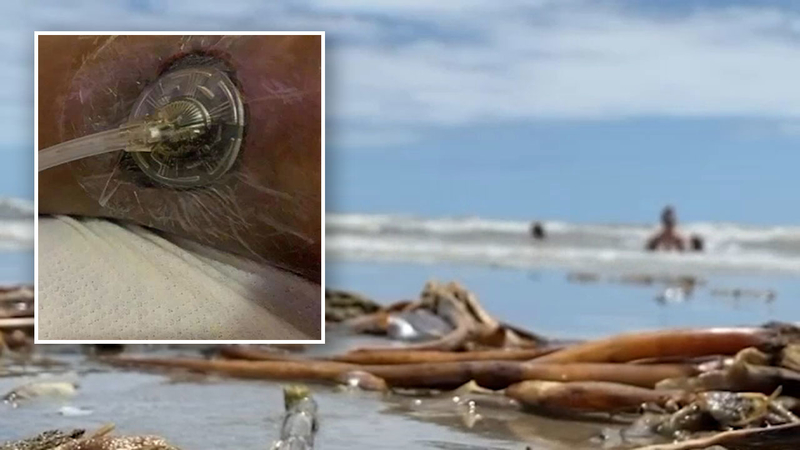 GALVESTON, Texas (KTRK) -- A Galveston health expert is warning the community about the possibility of flesh-eating bacterial infections along the coast.

The infection is caused by a bacteria called Vibrio vulnificus, which is commonly known as a flesh-eating bacteria. It can be found in raw or undercooked seafood such as oysters, and it's naturally present in brackish and salt water.

According to the CDC, symptoms of an infection can start 12 to 72 hours after exposure. In some cases, it can lead to amputation or death.

Dr. Alfred Scott Lea, professor of infectious disease at University of Texas-Medical Branch, said in the Galveston Bay area, they see at least six to eight cases each year. UTMB in Galveston is one of the hospital systems with the highest number of occurrences in the country.

"We typically see Vibrio from late June, early July, to probably later [in] October," Dr. Lea said. "That's the season, and that's when the tourists are here, too."

Dr. Lea said it's an aggressive infection and needs to be treated properly and immediately.

According to the Galveston County Health District, there was one case of Vibrio infection in 2020. So far this year, there have been two cases of infection and neither of those resulted in death. However, if someone is infected while at a beach in Galveston County then goes home or is treated in another county, then the case would be investigated by the county where the patient is being treated, not GCHD.

"Amputation happens in about half of the patients even in the best of hands, and then people can die from it," Dr. Lea said. "It's a serious infection. The worst thing: it's so rapidly progressive, it will pop up and kill a person within 24 hours if you are not careful."

Heads-up, weekend beachgoers! Galveston County reports just two Vibrio vulnificus cases this year, but it could be four times that once 2021 ends. The video includes an interview with an infectious disease expert from UTMB who offers the things to look for to prevent infection.

Darrell Dunn said he was involved in a golf cart accident while at Crystal Beach for his wife's birthday celebration in May.

The crash crushed his legs and injured him, but the wound on his leg was not washed out properly or examined by medical staff, Dunn said.

After a total of four doctor consultations, an infectious disease specialist told Dunn his leg was infected with the flesh-eating bacteria.

A wife is sending a warning out to those planning to hit the beaches this summer after her husband contracted a flesh-eating bacteria while at Crystal Beach.

"It's been over two months and they are still saying I've got about another month or two before they say it can actually start healing up all the way," Dunn said. "They say I might have to have skin grafts. That's what my doctor said after all this."

Since May 5, he has undergone two surgeries and could go through more, depending on how treatment goes.

"Just be more mindful if your kids do get scraped with a seashell or something. Just actually take it more serious because it could cause more problems down the line. It's definitely caused me more problems," Dunn said. "Be careful and be safe. That's one of the main things because I wouldn't wish this on anybody. Honestly, it's bad."