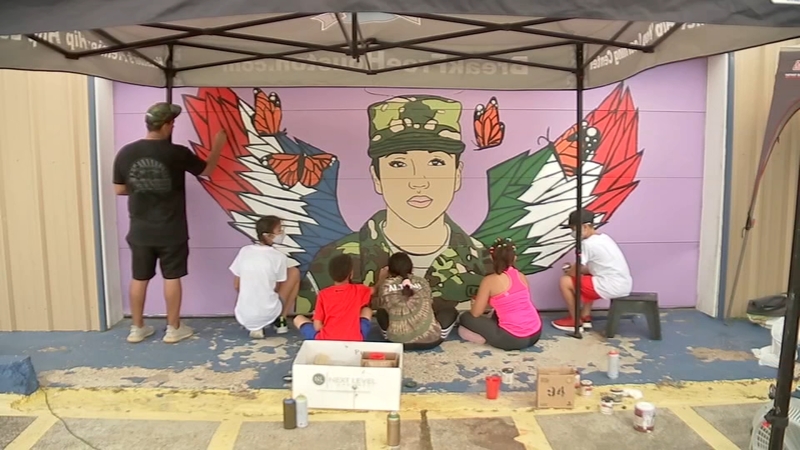 Mural in honor of Vanessa Guillen created in Pasadena

The mural can be found on Shaver Street in north Pasadena. The donations are meant to go to the Guillen family.

Vanessa was reported missing from Fort Hood earlier this year. Two months later, after frantic appeals from her family, a search revealed her remains buried on private property in Bell County. Her family said she told them another soldier was sexually harassing her, although the Army said no report had been filed.

It's believed she had been killed in the armory by Aaron David Robinson. Robinson killed himself before he could be arrested, and his girlfriend, Cecily Aguilar, was charged as an accomplice.

Not long after Vanessa's funeral, another Fort Hood soldier was found dead near the post.

Sgt. Elder Fernandes' body was discovered earlier this week. Although Fernandes had filed a sexual harassment complaint, it was not upheld, and local law enforcement said there was no sign of foul play.

Guillen's family wants an independent congressional investigation into how Fort Hood treats sexual harassment complaints. The Army is currently conducting its own review.

The Texas Senate Hispanic Caucus is now asking for that as well, citing at least two other deaths of soldiers whose bodies were found near the post.

"Even though I acknowledge the Army is taking steps to examine the base, I believe these reviews had been led and conducted by the Army, and I believe it needs to be an independent investigation," said caucus chair, State Senator Jose Menendez.