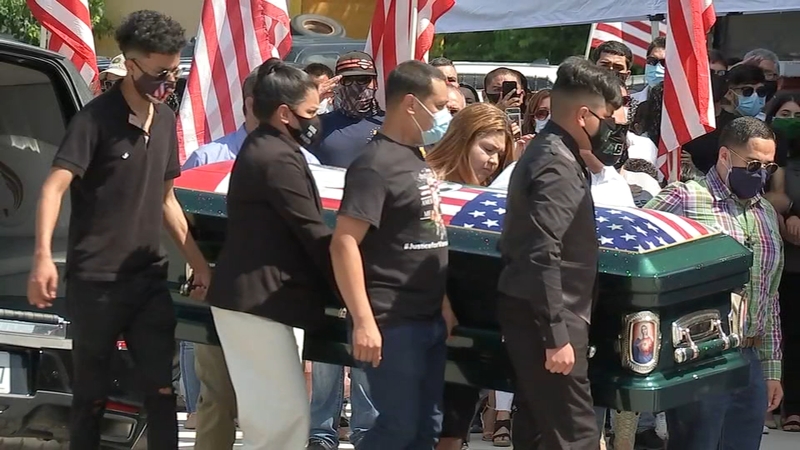 HOUSTON, Texas -- After an emotional public memorial celebrating Vanessa Guillen, she was remembered in a private funeral service.

"Even though she has tragically died young, her legacy will be long lasting," Turner said. "Bringing a great deal of change within the military and she's Houston's own. That's what makes us so very proud."

Turner noted that Guillen was part of the Hire Houston Youth program before she joined the Army.

HPD has been providing a special escort for the family, similar to what was provided after the death of Houston native George Floyd.

After the funeral, Guillen's family and friends stopped and appeared to be praying over the casket before doves were released.

Guillen will be laid to rest at Forest Park Lawndale Funeral Home in southeast Houston.

After the private funeral service for Houston native Vanessa Guillen, her family released doves in her honor. ❤️ https://t.co/I6GSmpUy7X pic.twitter.com/mmDpAS79lk

The day before Guillen's funeral, the community was able to say goodbye during the public memorial at her alma mater, Cesar Chavez High School.

Guillen's casket arrived at the school on a horse-drawn carriage that led the procession.

Ahead of the memorial's start, Guillen's casket was driven in a hearse from a funeral home for a Veterans Memorial cruise. The casket then was transferred into the horse-drawn carriage along the way to complete the route to the high school, where it took a couple of laps around the campus' soccer field to honor her time playing the sport at Cesar Chavez.

HOW DID WE GET HERE? Vanessa Guillen: The tragedy of her murder and her legacy

On holding the service, Houston ISD said it was honored to help facilitate the memorial:

During a meeting between Vanessa's family members and President Donald Trump at the White House last month, the president told them that they have his support and that he would personally help with funeral expenses.

"We are here to demand justice for Vanessa," said family attorney Natalie Khawam.

Before Guillen's funeral service Saturday, Congresswoman Garcia spoke about congressional investigation into the Houston native's murder and the bill.

"I will continue working on the bill. It will address a lot of the issues about sexual harassment, how the Army handles missing persons, how the Army is or isn't transparent in the communications with families," Garcia said. "There were a lot of issues raised here, but the important thing today is for the family, the grief, and we all join them in their prayers."

"What we're hearing in many of these cases, and regrettably, there's just too many, is that the solider is afraid of making the complaint because of the fear of retaliation, targeting, chain of position. So it would take it out of the chain of command, and that's a truly critical point," Garcia explained.