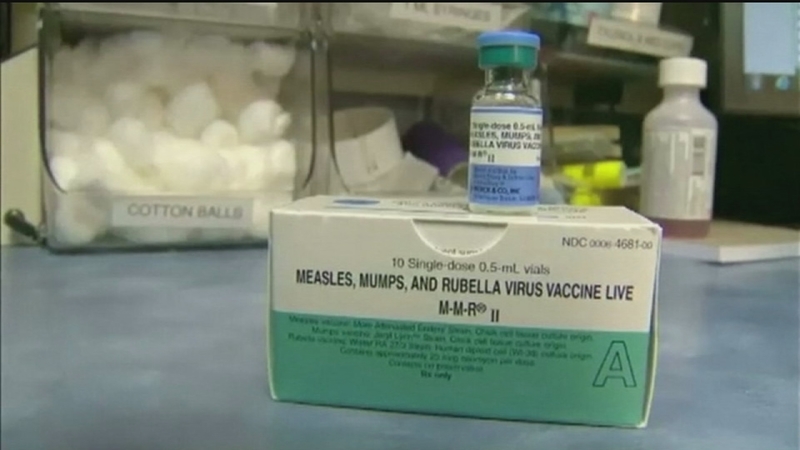 HOUSTON (KTRK) -- As a measles outbreak continues to grip the nation with more than 102 reported case, parents both for and against vaccinations are sharing their opinions on the practice.

But Dr. Peter Hotez, the president of the Sabin Vaccine Institute at the Baylor College of Medicine, is squarely on one side of the issue: he supports their use to fight a disease that kills.

"(Measles) is not a benign actor," he said. "We're talking about 100,000 deaths each year - 10 times more children are dying of measles every year than were killed in the Ebola outbreak in 2014. At one time, measles was the single leading killer of children in the world, but that's only because we achieved widespread vaccination coverage that those rates went down. Now I'm very worried that will come back."

When Hotez heard measles was making a comeback, he said he thought it was "such a tragedy, because it's so preventable."

Hotez said he's most concerned about how easily measles spreads. "It's one of the most highly contagious agents that we know about -- 12 to 18 times more than the Ebola virus, for instance. So if there's any unvaccinated clusters of children, you're going to get a measles outbreak. So the problem is not so much the 92 percent, the problem is it's not uniform across the state of Texas."

He continued, "We have 38,000 personal belief exemptions -- parents who opt out of vaccinations -- and it's not evenly spread. We do pretty well here in Harris County and Houston thanks to the fact that we have great city and county health department. The problem is there are pockets in Texas where there are much higher numbers of children that are not vaccinated and they are vulnerable to a measles outbreak just like we saw in Tarrant County in 2013."

In the wake of an Autism Speaks statement this week saying there is no link between measles and autism, Hotez echoed that response.

"We have a massive amount of evidence that there is absolutely no link between autism and vaccines," he said. "In fact, we know that it has a genetic or epigenetic basis. There's not even a plausible way by which a vaccine can cause autism so it's very important to get that word out that there's no link and yet there's a real danger for measles."

Another concern for some parents is that vaccines contain a number of chemicals. But Hotez defended the process by which vaccines are made to ensure their safety.

"I develop vaccines...and one of the things I've learned from working the Food and Drug Administration - the FDA - is they oversee every single aspect of the manufacturing of the vaccine," he said. "We have to pass enormous amounts of hurdles before we can even begin testing the vaccine to see if it's effective. And so the amount of work you have to do to get a vaccine's license is huge. I am so confident about the safety of vaccines. We have the best regulatory agency in the world."
Related topics:
health & fitnessvaccinestexas newsmeaslesu.s. & world
Copyright © 2022 KTRK-TV. All Rights Reserved.
TOP STORIES
Weather Alert Day: Severe T-Storm Warning extended until 11:15 a.m.
Hidalgo to release data on gun-related homicides ahead of NRA meeting
Texas' primary runoff election: What to know about voting
Travis Scott faces another lawsuit for 2019 performance, report says
Endangered sea turtle nest found on Galveston Island State Park
Young Thug rap lyrics used as alleged evidence in RICO indictment
Man found shot to death near homeless camp, HPD says
Show More
Baylor to relocate statue of slave-owning former university president
California parents could soon sue for social media addiction
Family hasn't returned home since 12-year-old shot while asleep
8-year-old was 29 pounds when she died after repeat abuse, filing says
Gas station charges nearly $8 a gallon ahead of holiday weekend
More TOP STORIES News