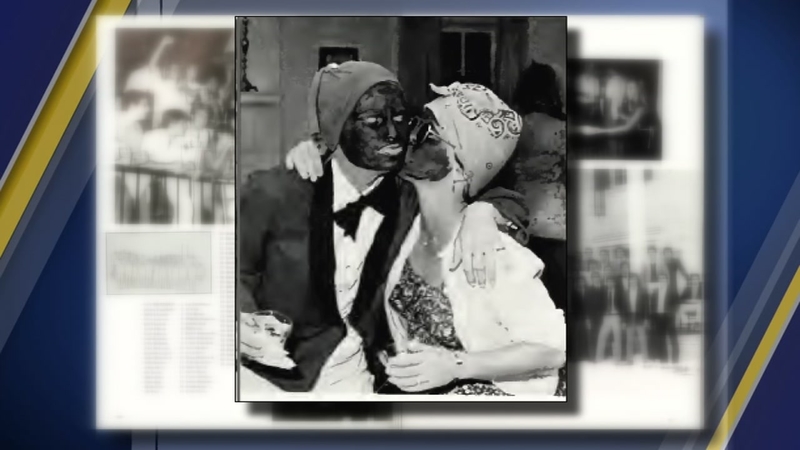 UNC fraternity members were clearly hamming it up and having fun posing for a depicted lynching in yearbook photos from 1979. A shot shows one white fraternity member in blackface and two others wearing Ku Klux Klan garb.

The students were members of Chi Phi Fraternity, and in one of the images, a noose was tied around the neck of a student in blackface, while a rope was hanging from a chandelier. Another published photo also had white students in blackface.

Current students reacted Wednesday to the actions of those UNC alums.

"That's actually very disrespectful. It's never OK," said student Austin Paschal. "Forty years ago, I can guarantee almost all the schools in the South were doing this."

Chi Phi was established at UNC before the Civil War and it is still around today. The organization's white frat house sits prominently on Columbia Street.

The national organization is responding to the photos.

"We strongly denounce the behavior and sentiments displayed in these images. Bigotry is not welcome in our Fraternity," said Chi Phi Executive Director Michael Azarian.

"We were disheartened by that," said UNC-Chapel Hill Interim Chancellor Kevin Guskiewicz.

"That's a horrific part of our past, one that I think has no place then or now in our university system," said UNC System Interim President Dr. William Roper.

An editorial in The Daily Tar Heel from that time said the pictures were taken during an "Old South" party. The writer remarks how "these photographs crystallized the racism that permeates this university."

Some students told Eyewitness News that racial undertones remain on the campus despite the removal of the Silent Sam Confederate monument.

"We are in the South. There still are active KKK things around," Paschal said.

"Some people still support that even on this campus today. It's something you can't hide, can't ignore it, but it's nothing be proud of," said student Veronica Griffin.
Report a correction or typo
Related topics:
educationchapel hillnorth carolinayearbookrace relationsuncsocial media
Copyright © 2021 WTVD-TV. All Rights Reserved.
TOP STORIES
Astros head to World Series after ALCS win over Boston
'Bobby Dynamite' helps chug the Astros towards ALCS title
Houston Astros on pace for record beer year
Don't get stuck in these traffic closures this weekend
Arrest made in case of Alvin abduction, sexual assault of a minor
20-year-old shot to death during break-in of Conroe home, police say
Man accused of dismembering mom's body after murder appears in court
Show More
Scattered rain returns this weekend
Dickinson family begs for answers 15 years after teen murder
Cleveland man indicted in connection with U.S. Capitol attack
The University of St. Thomas offers low-cost counseling services
JJ Watt on Texans: 'It hurts me to see where' fan base is now
More TOP STORIES News