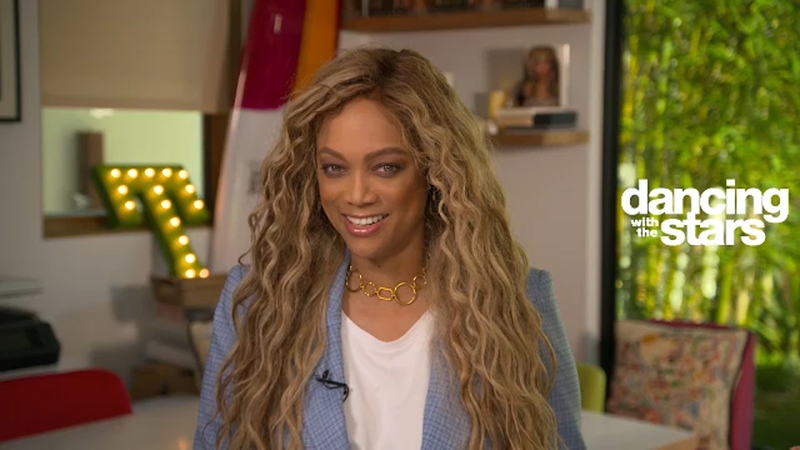 Tyra Banks says she hopes to bring something 'unique' to 'DWTS'

NEW YORK -- Tyra Banks is gearing up for the big "Dancing with the Stars" premiere and her first night as the show's new host.

She says that she wants to bring her own fresh take and bring a new, younger audience into watching the show, while still preserving the classic elements of ballroom dancing that longtime fans love.

Banks said she had to ask herself the important question of, "What could I add to this?"

"It's really important for me to not just step in and be host, but really truly bring something unique to it and also see how I could bring my audience to it. So, after some thought and time talking with the ABC team they were like, 'We really think you can do this and we really want you to,' and I said, 'You know what? So do I,'" Banks said.

She says that the show will experiment with some popular dance and see how the audience at home feels about it and likes it.

While you may not see a lot of Banks busting a move on the ballroom floor, she says you shouldn't rule it out either.

One thing that Banks says will be stepped up is the fashion, not only for her but also for the contestants.

"I honestly thought I was going to have to come in and bring mood boards and say this is how the dancers need to look and this is how the stars need to look, but it was the opposite, they flipped the switch on me," she said. "The wardrobe department had created a hundred-page deck and said, 'We want to elevate the fashion, we're inspired by the Met Ball, this is the traditional way we've done all of these types of dances and how we've styled them, but we want to take it up 10 notches. So they presented to me and I was like, 'Oh my God.' I was just so excited about that."

Banks added that she expects contestant Johnny Weir to have some high demands and big ideas when it comes to his costumes.

Banks says that she has had dinner with judge Bruno Tonioli and loves him, and that she shares a mutual friend with judge Carrie Ann Inaba, but she still hasn't met judge Len Goodman. She added that the show is trying to figure out some logistics with Goodman living in England.

Another challenge facing this new host is the fact that there is no live in-studio audience due to restrictions involving COVID-19.

"The lighting team is working overtime to make sure that the room feels electric and I have a lot of responsibility to keep the energy up in that room without a live audience, but you will feel a sizzle and a pop!" Banks said.

She says that she can't wait for the day she is able to hug the stars and dancers and "wipe tears myself!"

While she says she's a fan of all of the stars appearing on the show, Banks says her job is to stay well versed on what they are up to now. Among the stars she's most excited to see dance are two-time Olympic figure skater Johnny Weir, Disney star Skai Jackson, and Carole Baskin from "Tiger King."

RELATED: Meet the full cast of "Dancing with the Stars" season 29

Don't miss the big premiere of "Dancing with the Stars" on September 14th at 8 p.m. EDT on ABC!