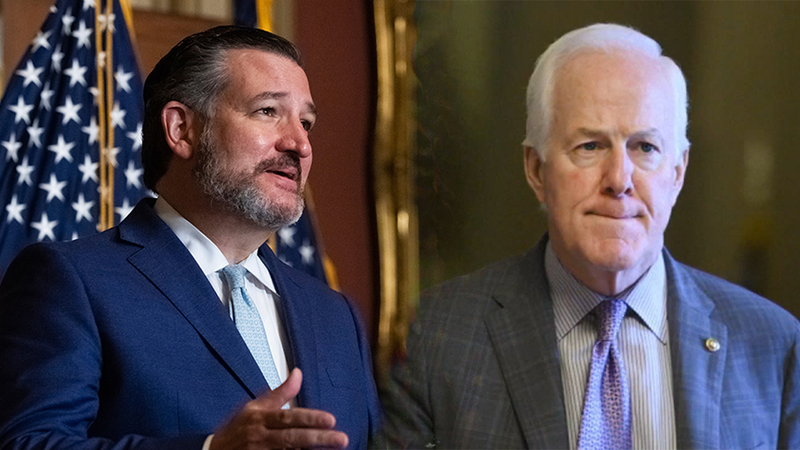 While Texas' lawsuit challenging the 2020 election results in four states continues to draw support from congressional Republicans, the state's two United States Senators are split over the issue.

Sen. Ted Cruz was asked by President Donald Trump to argue the case before the United States Supreme Court if the high court decides to hear it.

Sen. John Cornyn said Friday that he's not so sure about the case.

"I do not understand the legal theory," Cornyn said. "I don't want other states having a chance to change Texas law based on a similar effort."

Trump's challenge to overturn the 2020 presidential election is gaining support from Republicans in the House as 106 of them have said they're backing the lawsuit filed by Texas Attorney General Ken Paxton, including 12 Texas congressmen.

U.S. Reps. Kevin Brady, Dan Crenshaw and Randy Webber from the Houston area were among the dozen Texans to sign the amicus brief.

Cruz - while not specifically repeating Trump's claim that the election was "stolen" - has cheered on the lawsuits alleging voter fraud in states like Pennsylvania and Michigan that the Trump campaign has pursued since early November. On Tuesday night, Trump asked Cruz - and Cruz, a former Texas solicitor general, agreed - to argue the state of Texas' long-shot lawsuit seeking to overturn the election results if the case reaches the Supreme Court, a spokesperson for Cruz confirmed to The Texas Tribune.

That request is the latest evolution in what used to be a contentious relationship between Trump and Cruz. Both considered outsider candidates in the 2016 Republican presidential primaries, the two became allies and even made appearances together in the early stages of the race. But they quickly turned bitter enemies, lobbing vicious, personal attacks at each other as primary frontrunners.

After accepting defeat, Cruz, who did not return a request for comment for this story, slowly warmed up to the idea of a Trump presidency after endorsing Trump that fall. And now he has become one of Trump's most prominent allies in the Senate.

SEE ALSO: Once accused of cheating in an election by Donald Trump, Ted Cruz is now a leading voice casting doubt on 2020's results

Cruz has argued cases before the Supreme Court nine times as Texas Solicitor General before he was elected to the Senate in 2013.

Cornyn, a former Texas attorney general and Texas Supreme Court justice, said he is "not convinced" by Texas' legal arguments. Cornyn has not been shy about criticizing the way Paxton runs his former office, saying in October that "I've been troubled from the beginning, from his first indictment that hasn't been resolved in five years." Cornyn's comments were in reference to Paxton's pending legal troubles, including accusations of bribery and abuse of office, in addition to a securities fraud indictment.