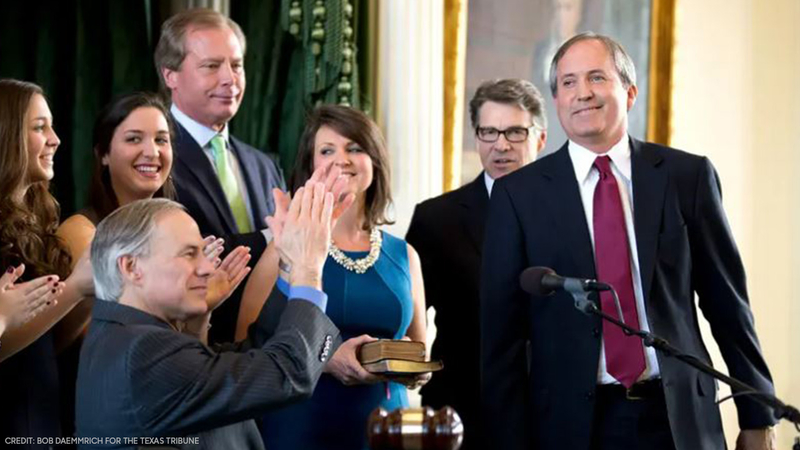 What to expect between Election Day and Inauguration Day

AUSTIN, Texas (KTRK) -- If Texas' audacious new lawsuit challenging the 2020 election results looks like a Hail Mary play for President Donald Trump, it might prove just as do-or-die for the attorney general who filed it.

Texas Attorney General Ken Paxton had fallen into political peril this fall, facing another set of criminal allegations after eight of his top aides said they believed he broke the law by using the agency's resources to do favors for a political donor. The allegations have reportedly sparked an FBI investigation that escalated this week when FBI agents served at least one subpoena at the attorney general's office. Texas Republicans have called the allegations concerning and begun to distance themselves from Paxton.

But even as the investigation deepens, Paxton's political star looks to be rising, at least on the right. In contesting the results of the election in Georgia, Pennsylvania, Michigan and Wisconsin, he has catapulted himself into the country's biggest political news story - a settled election that the president continues to contest, now relying heavily on an unprecedented lawsuit that has drawn the involvement of nearly every state. On Wednesday, Paxton joined Lou Dobbs and Glenn Beck to talk about the case, which conservatives have cheered; on Thursday, he joined Trump for lunch at the White House.

It wouldn't be the first comeback for the attorney general. He managed to hold on politically after a failed bid for Texas House speaker 10 years ago. And he was reelected as attorney general in 2018 despite the felony indictment that has dogged him for years.

In fact, the long-shot election case - which has become yet another high-stakes test of loyalty to the president - has played so well for Paxton that some are accusing him of filing it for his own benefit.

"It looks like a fella begging for a pardon filed a PR stunt rather than a lawsuit - as all of its assertions have already been rejected by federal courts and Texas' own solicitor general isn't signing on," U.S. Sen. Ben Sasse, R-Neb., said.

A spokesperson for Paxton dismissed the pardon speculation as "an absurdly laughable conspiracy theory" and said "this lawsuit is about preserving the integrity of our elections."

Paxton has claimed the case probes "unlawful and constitutionally tainted votes" in four battleground states that handed the White House to Joe Biden. Experts, state officials and U.S. Attorney General Bill Barr have all said there is no evidence of voter fraud on a scale that could change the election results. In the suit, Paxton claims that pandemic-era changes to election procedures in the four targeted states violated federal law and asks the U.S. Supreme Court to block the states from voting in the Electoral College.

If it succeeds, the lawsuit would radically alter the high court's standard for hearing cases directly from states, critics and many legal experts say, and set a dangerous precedent that judges have the power to alter election results. "Dangerous garbage, but garbage," said elections law expert Rick Hasen.

It's not hard to imagine Paxton filing such a lawsuit even under better personal circumstances. He has made himself a staunch Trump ally who plays up their relationship in public appearances and often greets Air Force One when it touches down in Texas. The two often line up in legal fights, and Paxton is frequently the first - or at least loudest - state attorney general to support a controversial Trump move, like a ban on travel from Muslim-majority nations.

Whatever Paxton's intentions, the lawsuit has already had helped bring him back into the good graces of some prominent conservatives, and back into the spotlight - to tout his pro-Trump message, not to defend himself against serious criminal accusations. State officials who distanced themselves from Paxton or avoided speaking about the attorney general entirely have now emerged as cheerleaders for the lawsuit.

On his radio show this week, Beck asked Paxton about criticism that the attorney general filed the lawsuit to distract from his personal political problems - or in a bid for a presidential pardon.

"Look, for six years I've been fighting for what I thought was right," Paxton responded. "I'm not gonna stop just because people have assaulted me. ... No matter what they accuse me of, no matter what they want to do to me - I'm here to do my job."

Paxton, who was indicted in 2015 on felony securities fraud charges but has yet to stand trial, has dismissed that case as politically motivated and denied wrongdoing. The more recent allegations come from eight of his hand-picked senior staff members, including some with conservative bona fides to rival Paxton's own. Paxton has dismissed his former top aides as "rogue employees," fired five of them and decried their "false allegations." He now faces a lawsuit for wrongful termination that could cost the state hundreds of thousands of dollars. The Austin American-Statesman reported that FBI agents served at least one subpoena at the attorney general's office Wednesday.

It is possible, though rare, for a president to issue preemptive pardons, but pardons do not provide protection against state or local crimes. Paxton's 2015 indictment was for crimes under state law. He has not been charged in connection with the latest allegations, but some of the crimes top aides say he committed - including bribery and abuse of office - could potentially be brought under Texas law instead of through a federal case.

Now, all three are praising his work in the case. This week, West said the state GOP "strongly supports" Paxton's lawsuit.

U.S. Sen. Ted Cruz, who has been quiet about the allegations against Paxton, even agreed to argue the case should the high court hear it. And more than 100 members of the U.S. House of Representatives, including a number of Texas Republicans, have signed on to the case as friends of the court.

The lawsuit has drawn support from Trump voters across the country, many of whom believe the president's false claims that he was robbed of a rightful victory.

Julie McCarty, who leads the vocal conservative group the True Texas Project, said "anything we can do to push back against a fraudulent election is a good thing, regardless of who it comes from." But she declined to answer questions about whether she would support Paxton politically.

State Rep. James White, a Hillister Republican who has praised the lawsuit's aims, said "it has nothing to do with Ken Paxton or James White or some senator from Nebraska - it involves how you lay this out in front of the court. And if it gets there, they'll make a ball or strike call and we'll all move on."

For Paxton, "it looks like it's good politics, but this is all politics," White said. "If Ken Paxton or James White wants good politics, it's politics. But when people do 'Russia collusion' and all this other stuff, 'well, it's for the good of the country.'"

Not all Republicans have embraced Paxton's lawsuit. Legal experts say it is a long shot, likely to trip over numerous procedural and substantive challenges. Republican officials in Georgia have dismissed the case as "constitutionally, legally and factually wrong."

Republican U.S. Sen. John Cornyn, a former Texas attorney general and Texas Supreme Court justice, said he is "not convinced" by Texas' legal arguments. Cornyn has not been shy about criticizing the way Paxton runs his former office, saying in October that "I've been troubled from the beginning, from his first indictment that hasn't been resolved in five years." Republican U.S. Rep Kay Granger said she is not supporting the lawsuit, which she called "a distraction."

And U.S. Rep. Chip Roy, a Republican who once served as Paxton's top deputy in the attorney general's office and has called on him to resign, called the lawsuit "a dangerous violation of federalism."

"I cannot support an effort that will almost certainly fail on grounds of standing," Roy said.

In their responses to the Supreme Court on Thursday, the battleground states that Texas sued scoffed at the lawsuit.

"Texas's effort to get this Court to pick the next President has no basis in law or fact," the response from Pennsylvania reads. "The Court should not abide this seditious abuse of the judicial process, and should send a clear and unmistakable signal that such abuse must never be replicated."

The court is likely to move on the case in the coming days, and legal experts expect Texas to lose. Still, in making the attempt, Paxton has succeeded in changing the conversation.

In an interview with the conservative Youtuber Steven Crowder, Paxton spoke about the existential stakes of the lawsuit, but he might well have been talking about himself.

"I'm thankful that this case has created enough interest that now we've got people focused on it," he said. "This really is crunch time. It's a threshold issue of survival for our democracy."