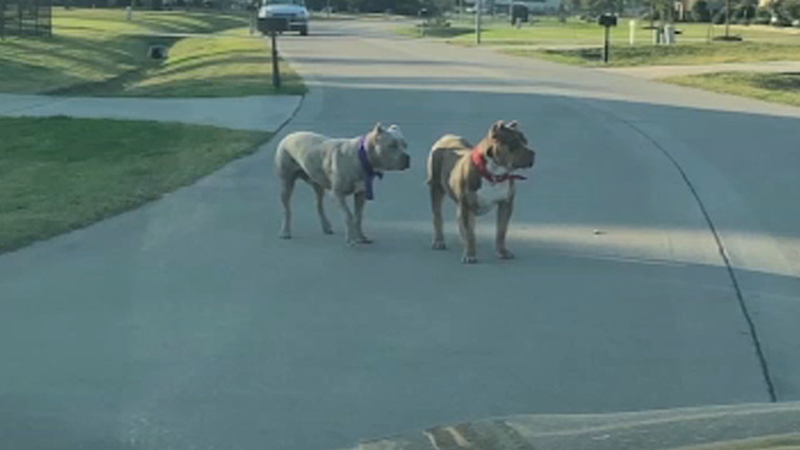 Dogs out again after another canine was mauled to death

MISSOURI CITY, Texas (KTRK) -- A Missouri City family whose dog was killed by their neighbor's canines is now demanding their neighbor get rid of nine of their dogs by the end of the year.

The family's attorney sent a letter with their demands Tuesday. Neighbors said the dogs belong to NFL player Trent Williams. The letter requests that Williams find another home for nine of the dogs by the end of the year or the attorney warns he will file suit.

Linda Flowers said her 3-year-old lab mix went outside for 10 minutes last Wednesday afternoon when it was attacked by the neighbor's dog at the fence line. A wrought iron fence separates the property, and Flowers thinks the dogs were able to grab the dog named Sandy and pull her under the fence.

Neighbors said the dogs are known to roam the streets, leaving them terrified.

Flowers fears a person could be attacked next.

Missouri City officials said the dogs had to be quarantined for 10 days while they investigate, meaning the canines were supposed to be isolated in a secure cage and only allowed to leave the cage on a leash in an enclosed area.

Despite that, neighbors said the dogs were out again Tuesday, meaning the quarantine had been violated. Missouri City says citations were issued.

Still, the Flowers family want the dogs gone for good, and their attorney sent a letter saying nine of them need to be gone by Dec. 31 at 5 p.m.

"The more neighbors I talk to, and just to see the fright and fear that they have, and to see that these dogs just get out continuously," said John Kovach, Flowers' attorney.

We reached out to Williams for comment. He did not return our calls, but he previously said one of his dogs was being attacked by Sandy and that the other dogs were merely protecting that dog.

"For Sandy to attack his dog is just completely ridiculous," said Flowers.