KTRK
HOUSTON, Texas (KTRK) -- When we spend an average of 61 hours stuck in traffic jams each year, we're bound to see some weird stuff.

While wrecks and never-ending construction contribute to sluggish Houston freeways, our hellish congestion can also be blamed on a bizarre mix of outlandish human behavior, wayward animals (dead or alive), and the sudden need to get butt naked.

These strange events, by the way, are a great distraction from the fact we're losing an average of $1,490 in lost time and 29 gallons of gas each year while sitting in traffic, according to The Texas A&M Transportation Institute.

You're late cause someone had to get naked (again)

Over the last year, we can think of at least three incidents where people stripped down and let it all hang out, from the North Freeway to North Loop to the Southwest Freeway.

Sometimes the naked run beside us, sometimes they climb atop 18-wheelers, and in one instance, they teeter on the brink of a frightening fall from the top of signs as we hold our collective breath.

SEE ALSO: Southwest Fwy shut down after man in his underwear climbs atop sign

Investigators say a man threatened to jump from an overhead sign and onto the Southwest Freeway at Gulf Freeway.

Given the alternative, we'd much rather see cuddly animals live. But it takes an awfully brave person to stop their vehicle and to dart between Houston traffic to make it happen.

The woman who chased a quick-moving kitty around the Sam Houston Tollway recently was trying to do a noble thing, but it ticked off a handful of drivers who showed their appreciation with a slew of hand gestures.

A feline on the freeway caused quite a frenzy for tollroad officials on Thursday.

Officials say it's not worth risking your life.

We've seen it all too often, and there really isn't a good reason for it. The push down, drag out road rage fights we've seen on abc13 over the last year have drawn a ton of attention.

One fight in particular on the Gulf Freeway really stands out. A pregnant woman was seen trying to stop an SUV driven by her ex-boyfriend. Absolutely brutal.

We thought we'd seen it all, and then a woman was accused of stabbing a driver on the Southwest Freeway. Fortunately, the man was expected to survive, but only after he hit the guardrail, spun his vehicle and then suffered a head-on collision with another driver.

The Southwest Freeway was shut down as a result of all this, and HPD says the woman was whisked away in a getaway car that was likely following the man's vehicle.

It's Texas. Livestock is abundant. Sometimes the livestock decides to sunbathe on our precious and ample freeway space. Hilarity ensues until we grow hungry and/or need to use the restroom. Then it's just plain rude.

The quote above, by the way, is from the movie "Twister." It has been inserted here on a dare.

Love can happen anywhere, at any time

Most of you know the story, but it bares repeating: Fellas, never ever stop traffic on a Houston freeway to impress a woman.

Vidal Valladares found out the hard way that drivers on the Gulf Freeway (and anywhere in Houston really) aren't keen on traffic for the sake of a marriage proposal.

Not only was he charged for obstruction of a highway, but he and his main squeeze Michelle Wycoff said they received threats on social media.

Love can make you do some crazy things, especially when you're young. But shutting down one of the busiest freeways in the U.S. to propose? That's what one couple did.

First we brought you the story of a man who had I-45 shut down to propose to his girlfriend. Now, Eyewitness News has learned the that man is facing charges.

The rich aroma of garlic-brushed pizza dough likely stirred hunger pangs in drivers on the West Sam Houston Tollway after a crash caused a Little Caesar's pizza truck to go up in flames.

While it was a great loss for the company, the fortunate news is the driver was okay.

A Little Ceasar's truck was engulfed in flames on the W. Sam Houston Tollway

Sometimes, you just have to dance, but the Eastex Freeway isn't the greatest dance floor.

One man ended up in handcuffs after he climbed on top of his car and danced. Vehicles had to drive around the elevated dance platform until HPD arrived.

Speaking of dancing, check out these illegal moves

This freeway dance party happened following a police chase on I-45. When HPD started giving the suspect orders over the microphone he took the opportunity to start dancing. The suspect was finally taken into custody after nearly 10 minutes.

HPD orders turn into a freeway dance party for chase suspect on I-45.

Why did the frozen chickens cross the road?

An 18-wheeler crash on Highway 288 meant major delays as emergency crews worked to clear dozens and dozens of frozen chickens from the roadway.

The highway was closed for more than eight hours, but the good news is the big rig driver survived the wreck. 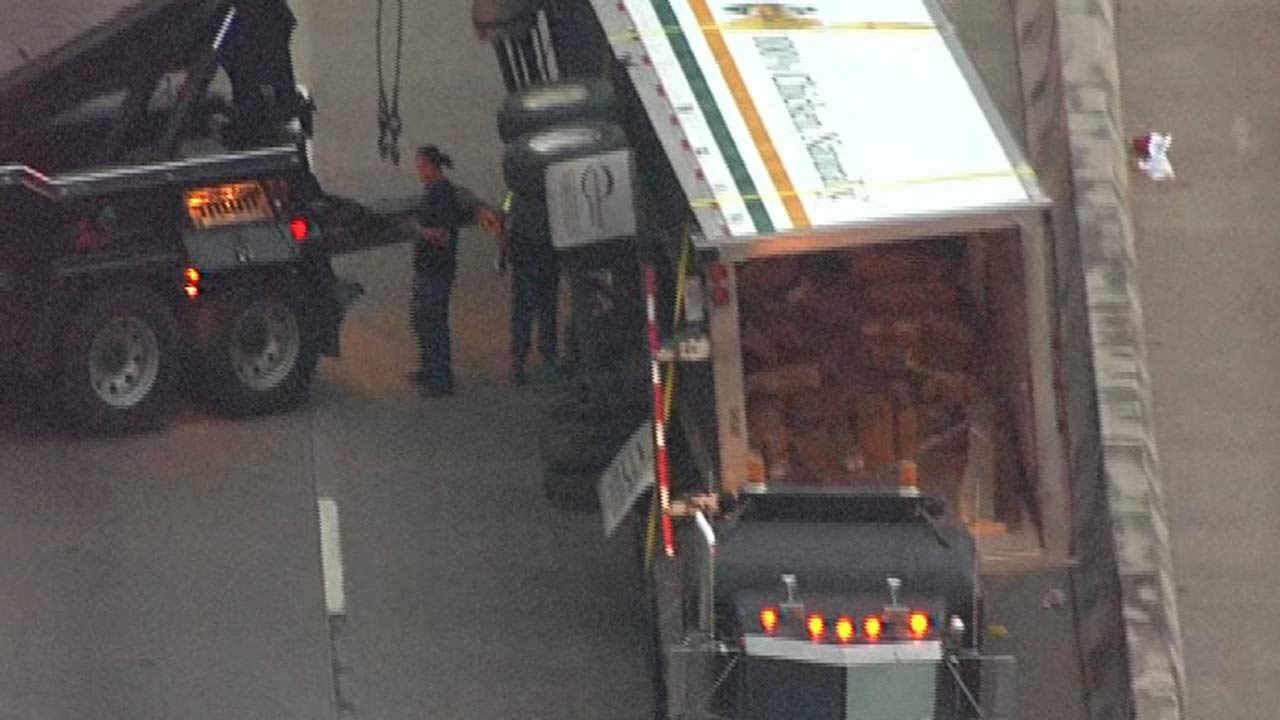 Who spills a load of olive oil and leaves it on a highway? Police wanted to know the same thing after someone slipped away from the big mess near State Highway 288.

For five hours, crews worked to clean the oil slick. When they couldn't wash it away, a load of absorbent clay was ordered, spread on the concrete and then carted away so they could reopen the roadway.