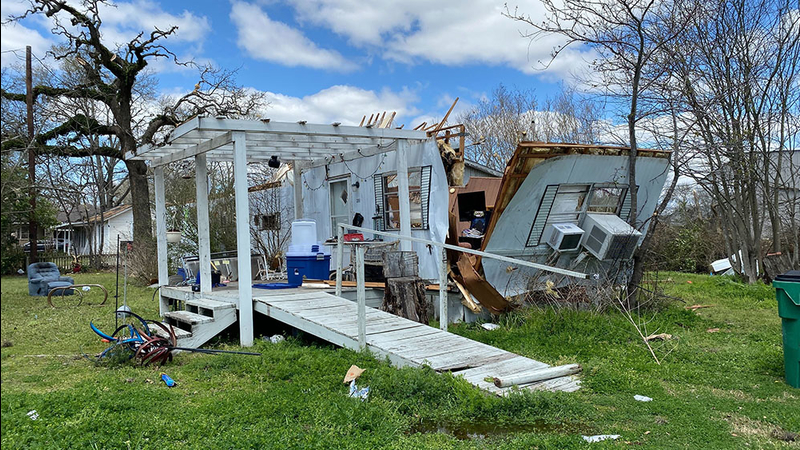 MADISONVILLE, Texas (KTRK) -- Clean up continues in Madisonville after a tornado and severe storms left a path of destruction.

According to preliminary information from the National Weather Service, an EF-1 tornado touched ground at about 9:40 p.m. on Monday.

Still on Tuesday evening, more than 1,000 people in Madison County were without power, according to Entergy.

City officials are still figuring out how many homes and businesses were damaged due to the storm.

"We have had no reports of any injuries or casualties, and we consider ourselves very lucky considering how significant the damage is from this tornado," said Fabrice Kabona, Madisonville's city manager.

ABC13 saw downed power lines and poles, roofs blown off, and a home that was moved 10 to 15 feet off its foundation on the west side of town.

Further east, more damage was spotted at the corner of North May Street, Highway 75, and East Collard Street.

"It sounded like a train. 'Whoo-whoo-whoo,' like that," said Larry Robinson, who was in his home when the tornado hit the west side of Madisonville. "It scared me. I just fell down on the couch. I thought it was going to come through the window."
Thankfully, Robinson's home was only slightly damaged by the storm.


Roxanne Espinoza, who lives a couple of streets over from Robinson, was not as lucky.

"It just got silent, and then loud, all of a sudden. And the walls...the whole house was shaking," said Espinoza.

The home where Espinoza lives with her dad and brother was destroyed.

"The roof was on top of the addition where I was. So I couldn't get to them. It was very frightening. I didn't know if they were okay," said Espinoza.

Despite the loss of their home, Espinoza says she is thankful.

"I am so grateful. I have said so many prayers. All of this can be replaced, but my family can't," said Espinoza.

RELATED: 1 killed and over a dozen injured as tornadoes ripped through north Texas


Less than a mile away, on W. Main Street, Larry Willis is dealing with a mess too. The strong winds tore off the roof of his barbeque restaurant.

Willis has been barbequing in that location for more than 20 years. He says he's making plans to build his restaurant back even stronger and hopes to be cooking again in a few weeks.

Madisonville Police Chief Herbert Gilbert says he is confident the community will continue to help each other through the rebuilding process.

"The first experience I had of a disaster was the ice storm. I tell you, when that ice melted, people were out, just like what you see today. They were out taking care of business," said Gilbert.

The American Red Cross has set up an assistance center at The First Baptist Church of Madisonville at 300 S Elm Street.