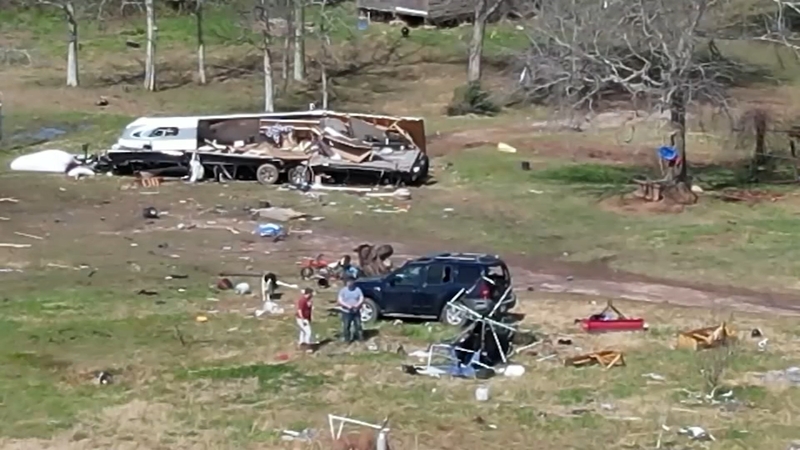 ABC13's Courtney Fischer arrived at the rural town in Fort Bend County, where she found an RV trailer flipped over and ripped apart.

According to the family at the scene, two parents and three children, ages 2, 4, and 7, were all taken to the hospital after the tornado ripped through.

The sheriff's office said everyone sustained non-life-threatening injuries and are expected to be OK.

WEATHER ADVISORY
Fort Bend, please stay in if at all possible. There is torrential rainfall & a reported tornado touchdown in Beasley. A mother and child were rescued from a trailer that flipped over on a roadway in Beasley. They sustained minor, non-life-threatening injuries. pic.twitter.com/JNmZdT1RSW

A family member told Courtney that the mother was trapped, clutching her 2-year-old. Family members worked for over 30 minutes to free them from the debris.

Video from the scene showed the damaged trailer. It appeared that it was nearly split in half. The family said the RV home rolled about 25 yards.

"I just don't even know how those people even survived," neighbor Arletta Phillips said.

Phillips moved to the home that fell directly into the tornado's path just a month and a half ago. She and her husband's home sustained damage, but nothing that cannot be fixed. Their home sits between two homes that are no longer livable.

"I feel blessed," Phillips said. "As they say, someone had their hands on me."

Beasley has about 680 people, and the homes are spread apart between farmland.

According to ABC13 Meteorologist Rachel Briers, the highest winds moved through Beasley around 5:40 a.m. Tuesday. The National Weather Service later determined the event was an EF-1 tornado with winds reaching 90mph.

According to NWS, possible tornado touchdown in Beasley. @fbcso says a mother and child, 7, were rescued from a trailer that flipped over here. They have minor injuries.

Just got to Beasley. Starting to get eyes on the damage. #abc13 pic.twitter.com/NHnpByp7NH

"Looking at the damage here, I think it was on the ground most of the way," Dan Reilly, who surveyed the area for the NWS, said Tuesday afternoon. "You see a lot of tree damage here and that other home there. You can really follow a path."
Report a correction or typo
Related topics:
fort bend countyfort bend county sheriff's officestormtornadorainstorm damagesevere weather
Copyright © 2022 KTRK-TV. All Rights Reserved.
TORNADO
At least 1 dead, 44 injured after tornado strikes northern Michigan
Deadly May tornadoes tore through Houston in 1983
Tornado watch vs warning: What's the difference?
Multiple tornadoes spotted in OK and TX as storms move into the area
TOP STORIES
'It was like a mad dash:' Clear Creek ISD senior set to graduate
Man dead after being shot during road rage incident, HCSO says
Murder suspect dead after found unresponsive in cell, sheriff says
Scattered storms move in tonight ahead of front
Astros fan from Spring celebrates 95th birthday with favorite team
Child hospitalized after found 'unresponsive' at Splashtown
Runner dies after collapsing at finish line of Brooklyn Half Marathon
Show More
Global K-pop sensation Seventeen kicks it in Houston in new tour
Authorities search ends for man with felony warrant out for his arrest
Early Voting holds off Epicenter to win Preakness Stakes
'NFTs: Enter the Metaverse' | Trailer
Driver shot during attempted robbery on Gulf Freeway feeder, HPD say
More TOP STORIES News