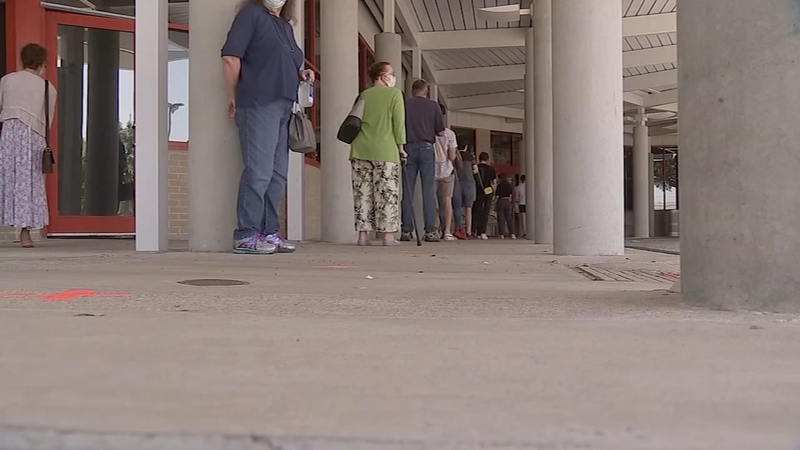 GOP and Democrats trying to expand base in Galveston County

GALVESTON, Texas (KTRK) -- As demographics shift in Galveston County, both political sides are working on better representation, and it could come with the 2022 primary.

That shift is showing up during the 2022 primary. Bianca Gracia is a Republican running for state Senate District 11. She's also the president of Latinos for Trump.

She said that in order to get more Latinos involved in politics, you have to talk to them.

"You go have conversations with them," Gracia explained. "You engage. You outreach. You have townhalls. You talk to them."

Currently, nearly all of the top elected leaders in Galveston County are white males, but county Democrats are also trying to change this.

"We just started our diversity and inclusion community, which is part of the party," Galveston County Democratic Party chairwoman, Tierrishia Gibson said. "We have a Black Caucus, Asian Caucus, Hispanic Caucus. So we're reaching out to those people to get candidates."

Gibson says it may have been hard to attract those candidates in the past, but it's getting easier.

"We're used to seeing the all-white male, but I think with President Barack Obama that was kind of our green light to say, 'Hey, if he can make it to the top to reach the presidency, then we can do the same thing,'" Gibson said.

"Both parties are trying to find a way to harness the increasing diversity in Galveston County," University of Houston political science professor, Brandon Rottinghaus explained.

"It's a slow change demographically that's going to lead to a slow change politically," Rottinghaus said the parties must expand their base, and reach diverse candidates who can reach more voters. "The demographic change is like a sailboat. The wind will come and it'll push your boat, but it takes a little bit of time for it to maneuver quickly."

CAN DEMOCRATS CRACK INTO THE REPUBLICAN STRONGHOLD IN GALVESTON COUNTY?

The common factor with Galveston County elected officials isn't just that they're white men. They're all Republicans too. Only one county commissioner is a Democrat. The rest of the top county leaders are Republicans.

"The problem for Democrats you have a self-reinforcing problem if you don't do these things," Rottinghaus explained. "If you don't raise money. If you don't increase your profile. If you don't run candidates for office. Then you're effectively ceding that land to Republicans."

The Democratic primary ballot in Galveston County is two pages. For the Republicans, it's four. There are several races in which no Democrat is even running in the primary. Because of this, the Republican primary winner will assume office without a general election fight.

"This is a real problem for Democrats," Rottinghaus said. "If they're not filling these spots, then, Democratic enthusiasm among their base will reduce. If they don't come out to vote then it just continues to perpetuate."

Gibson said they're trying new grassroots efforts to reach more voters. She admits it's challenging to get candidates to run in certain races because of the fear of ultimately losing to the Republican candidate. However, political experts believe even in defeat. It could energize support by getting voters to know their candidates and their ability to fight.