Beto O'Rourke puts spotlight on TX power grid: 'It was the failure of leadership from our Governor' 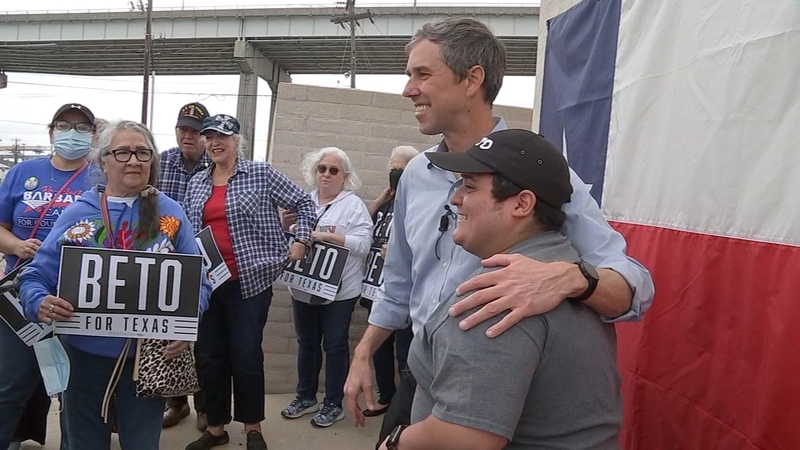 HOUSTON, Texas (KTRK) -- Houston was the 12th and final stop on Beto O'Rourke's tour intended to remind Texans about the 2021 winter storm, the grid's failure, and the lives lost. It comes on the one-year anniversary.

"No community lost more people during that power grid failure than did Houston and the surrounding area," O'Rourke said while explaining why he ended the tour in the Bayou City.

The Democrat gubernatorial candidate started his day in Houston on the city's eastside. He visited with Janice Carter and Franchelle Kiel Hickman to talk with them about their sister, Deborah Kiel, who died from heart failure after two days without power during last year's storm. He visited with those impacted in each of the dozen stops along his tour.

Prior to his stop in Houston, O'Rourke was in Corpus Christi. That is where ABC13 caught up with the candidate during his road trip which focused on last year's power grid failure during a winter storm that killed 246 Texans, took out electricity to 2/3 of the state, shut off water for nearly half of Texas, and caused an estimated $130 billion in damage. O'Rourke said he believes it's an issue that resonates on the storm's anniversary and beyond.

"It's going to resonate every single month when we open our utility bills and see higher costs for keeping the lights on," O'Rourke told ABC13. "I want to make sure people understand why we lost power last year. It wasn't an act of God. It was the failure of leadership from our Governor."

One of the key solutions for the grid is connecting Texas to the rest of the country, but it's only part of the long-term solution, O'Rourke said.

"In addition to connecting ERCOT to the nation's grid, which would allow us to draw down power when we need it and sell it back up when we have a surplus," O'Rourke said. "We have absolutely got to weatherize the gas supply so that our own grid is reliable, to begin with."

It is a long road to November, some 266 days from Election Day and while issues may rise and fall in importance or focus along the trail, the grid is one that O'Rourke's campaign plans to keep front and center.