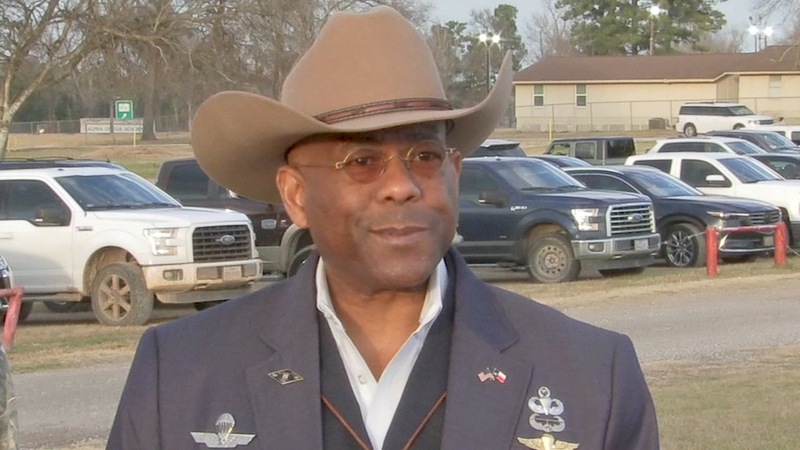 HOUSTON, Texas (KTRK) -- There are seven Republican challengers to Gov. Greg Abbott in the Texas primary. Among them is a former Florida Congressman and chair of the Republican Party of Texas, Allen West.

ABC13 met with West at a recent campaign stop in Huntsville on his statewide tour ahead of the primary, where he visited with a group of veterans at a charity event.

"The number one issue is the border. And also safety and security," said West, a retired U.S. Army Lieutenant Colonel.

He has campaigned on the border, claiming that the state, and the federal government, are not doing enough to stop illegal immigration. That is a theme among GOP primary candidates. Still, West is also critical of the deployment of the Texas National Guard and the well-publicized issues regarding their inconsistent pay and mental health.

Campaigning with West was musician and conservative activist Ted Nugent, a one-time supporter of Abbott but now calls West an upgrade.

"I helped Greg Abbott to get voted in because I saw that he was a good attorney general," Nugent said, "and he represented the constitution, but a lot of Texans have been let down by his failure to comply with his promises."

West is among those Republicans who may have pushed Abbott to campaign farther to the right, seeking an endorsement from former President Donald Trump. West, who was the short-lived chair of the state Republican party, who resigned ahead of his gubernatorial run, said Abbott's response to COVID-19, mandates, and a failure to call the legislature into emergency session, played a role in his decision to run.

RELATED: Beto O'Rourke puts spotlight on TX power grid: 'It was the failure of leadership from our Governor'

"I am very focused," West said. "I believe in the constitution and restoring the rule of law. I don't believe any elected official has enumerated power to decide who or what is essential. I think it's not so much about the party. It's about understanding the relationship between the individual and government institution."