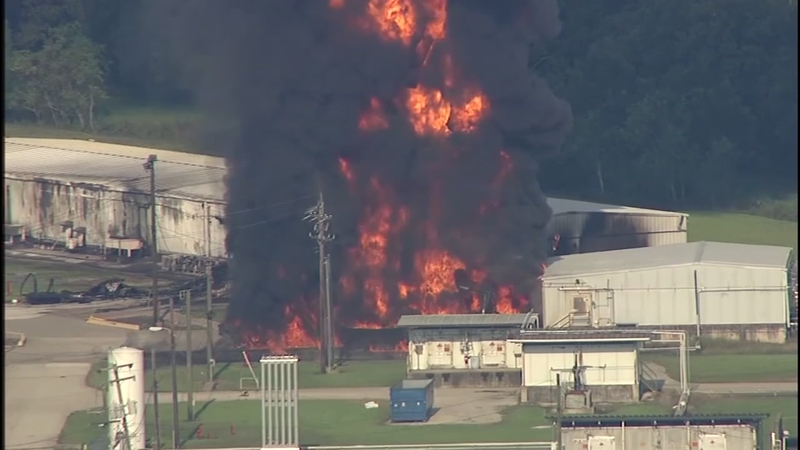 HOUSTON, Texas (KTRK) -- When chemicals stored at Arkema's Crosby plant caught fire, the EPA said they didn't detect any concerning levels of toxic chemicals being released. Company spokespeople told us no chemicals were likely to leave their property.

But we wanted to know for sure.

Tests on floodwater came back clean, but a chemist told ABC13 Investigates what we found in nearby soil and sludge is concerning.

"A million questions"
We met Shannon Davis outside the Arkema plant's fence just off Highway 90 in Crosby. He saw us testing water in the fence ditch and thought we were testing with the government. We introduced ourselves and kept talking.

RELATED: What we found in floodwater around Houston

"I've got a million questions about all this," Davis said.

Davis just wanted someone to see what he says happened to the water in his ditch after those massive chemical fires at the Arkema plant less than two miles from his place. There is no other chemical facility close by.

The water in the ditch was black and filmy. Bubbles were trapped at the surface and it coated the grass.

"I am going to say more than likely it's from that plant up there," Davis said

Davis' neighbor said it happened on a smaller scale to a jar of rainwater open on his porch as he says the smoke drifted over his home. Davis' wife says the family's chickens are laying odd eggs.

"For the egg to melt down like that, it's very bad," Bonnie Davis said. "I am extremely concerned."

Two chickens have died, the remaining ones won't eat the grass and Shannon felt sick after mowing it, he said.

"We don't know what it is, we don't know if it's from the containers, the product itself," Shannon said.

Floodwater swamped Arkema's organic peroxide plant when nearly five feet of rain soaked Crosby. When the power went out and generators did too, the chemical couldn't be kept cold. The company pulled crews out of the plant for their safety. The company said it had no other option than to let trailers full of organic peroxide catch fire and burn themselves out. A week later, we tested the water.

Despite filmy dark water in the Davis' ditch and a chemical odor at the Arkema fence line, tests from both samples showed no chemicals above reportable levels. Similar samples collected nearby by the EPA about the same time showed the same thing.

We went back once the water was gone.

A&B Labs' Lane Voorhies collected leftover residue from Shannon Davis' ditch and soil 150 feet away. Results from both show a mix of heavy metals like arsenic, barium, chromium, lead, and selenium. At least one chromium result was enough to raise health concerns in some states - though not Texas. The others were at reportable levels but not dangerous. It's possible the heavy metals are from a heavy motor spill unconnected to Arkema,

But tests on the sludge in the ditch revealed the most concerning data. A mix of chemicals called polyaromatic hydrocarbons - PAHs - all with names no one but chemists recognize.

One in particular, "benzo (b) fluoranthene," was at or above the EPA's limit. Others were at a reportable level, but below what the government says could cause health risks.

PAHs don't occur naturally in the ground. Rice University chemist Dr. Qilin Li reviewed the results for us and said Arkema's fires may be the cause.

"Whenever you have incomplete combustion, that's when you can create intermediate products - often times poly-aromatic hydrocarbons," Dr. Li said.

In normal circumstances, chemical plants can burn waste products hot enough to get rid of virtually all contaminants.

There is no definitive proof yet showing where the PAHs came from, but there are questions scientists and Shannon Davis want answered.

Arkema says they are cooperating with investigations and referred us to EPA statements saying there were no concerning levels of toxic chemicals released.

"[O]ur company resources are concentrating on providing information to county, state and federal environmental agencies as they continue their investigations into the Crosby incident, which will include an evaluation of any environmental impacts due to the fires," said a company spokesman in an e-mail. "We are fully cooperating with those investigations and we are in the process of gathering and providing information that will help the investigators assess the impact."

There's no evidence the EPA did tests similar to ours.