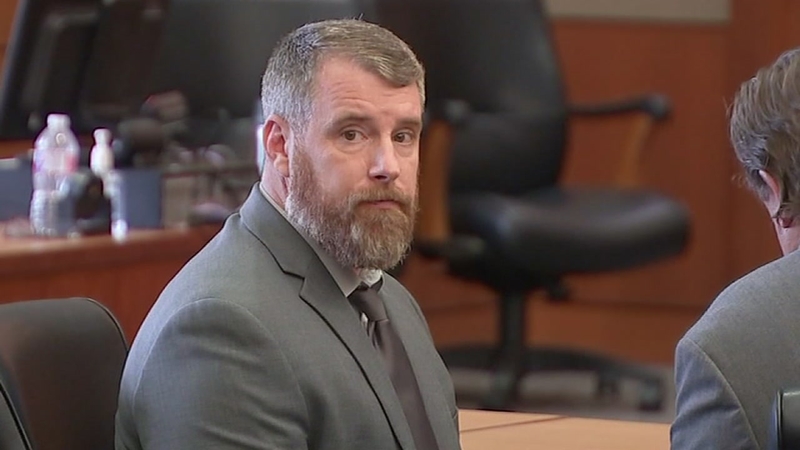 HOUSTON, Texas (KTRK) -- A jury has found Terry Thompson guilty of murder in the May 2017 chokehold death of John Hernandez outside a Denny's restaurant near Crosby, Texas.

He could receive up to 99 years or life in prison. Sentencing will begin at 9 a.m. Tuesday.

Left in tears and dismay in June after a judge declared a mistrial in Thompson's first trial, Hernandez's family got the guilty verdict they wanted Monday afternoon.

On Friday evening, the family told Eyewitness News there were stark differences between that trial and this one. In the prior case, the family said they were upset with the way things were handled, and went as far as to push for new prosecutors in Thompson's retrial.

But this time around, the family was happier with the way the case was presented and by the testimony from different witnesses.

This case got a lot of attention because of the videos taken the night Thompson had his fatal confrontation with Hernandez.

Thompson's wife, Chauna, is a former Harris County Sheriff's deputy. She also faces murder charges for her role in the altercation.


Both sides presented closing arguments on Friday morning before the jury was charged to begin deliberations.

When prosecutors delivered their opening statements in Thompson's re-trial on Oct. 23, there were notable differences this time around.

In closing arguments, prosecutors replayed the video from that fateful night as a final ask of jurors to exact justice and find Thompson guilty of murder.

The defense said Thompson was defending himself against a belligerent Hernandez who punched Thompson in the face.

Prosecutors repeatedly pointed to video in which Hernandez is seen "tapping out," surrendering to Thompson. But Thompson continued to hold Hernandez for another three minutes and 36 seconds.

Prosecutors sat quietly for that length of time, demonstrating how long Hernandez fought to breathe under Thompson's weight.

But the defense countered, saying an intoxicated Hernandez struck first in May 2017, punching Thompson when told not to urinate outside the restaurant. They say it wasn't murder. It was self-defense."

"What we (attorneys) say don't mean a hill of beans," said Courtney. "It's what y'all say the evidence says. Y'all get to look at it. Y'all decide what's credible and isn't."

"The level of frustration for the family was because of many factors, but more importantly, because of the fact they are not going to get their loved one back," said Cesar Espinosa, Hernandez family spokesperson.

Meanwhile, the defense says the outcome of the first trial was very much in favor of acquitting Thompson, with 11 to one voting not guilty on the murder charge. They hope for a similar outcome this time.

"I thought that the jury split was certainly to our advantage. I think they saw the facts," said Courtney.