Woman missing her teeth for a year turns to Ted 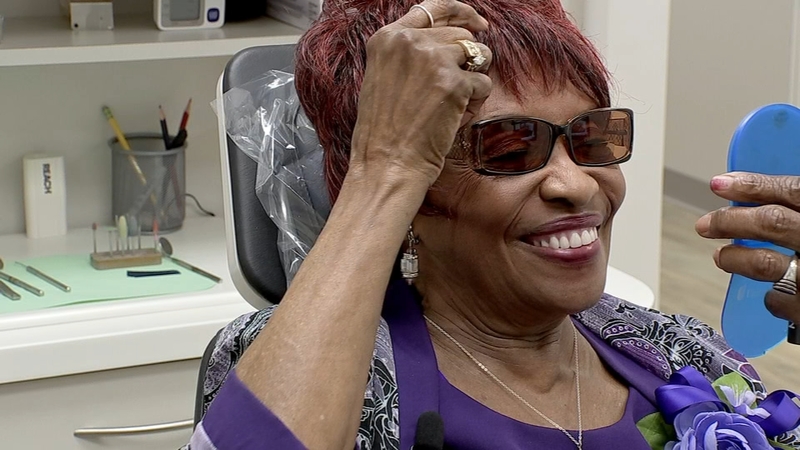 Turn to Ted helps bring back woman's smile and money

HOUSTON, Texas (KTRK) -- A Houston woman has a new smile and plans for dinner for the first time in a year. Marie Spencer turned to Ted after she says a dentist pulled all her teeth and couldn't get new dentures in.

It'd been a year since Spencer could see her smile. For most of that time, she had no teeth. "Just my gums," she told ABC13 Investigates' Ted Oberg.

Spencer says her first dentist pulled all her teeth and tried to fit her with upper and lower dentures. After months of trying, failing and spending thousands of her dollars, Spencer says it just never worked.

Frustrated, she asked for a refund, but she tells ABC13 Eyewitness News, "They were giving me the run around and didn't want to give my money back."

That's when she called ABC13's Turn to Ted team.

Spencer told Oberg, "Once you called him (the first dentist), the next couple of days, I've received the check."

But it wasn't enough to get dentures somewhere else.

"The first time she came in here, to now, oh my God. What a difference, right?" said Alani.

On that first visit, Alani told Spencer, "I said, 'I got bad news and good news.'"

That's when Alani made her day.

"'The bad news is you're going to have to come see me a lot,'" Alani told Spencer. "'The good news is it's not going to cost you anything,' and she went crazy."

Sitting in the dentist's chair, Spencer told ABC13 Eyewitness News, "Oh man, I never been so happy and ecstatic in my life."

On her final visit, Alani told Spencer, "You look beautiful!"

Spencer didn't take her eyes off her mirror, but thanked Dr. Alani. "It's because of you," Spencer said, before calling her new smile "amazing."

Leaving the office that day, after a year of soft food and no teeth, Spencer finally had dinner plans for the first time in a year.

"I'm going to go home and make me a hamburger," she told ABC13's Oberg.

With her mouth watering, she continued, "It's going to be my ground round, lettuce and tomatoes, my pickles and mustard, and mayonnaise."

After a year of soup and shakes, one can only imagine how good it tasted.

Dr. Alani wanted to make sure we knew her team included Houston's Miracle Dental Lab, which made Spencer's dentures for free.

Spencer's first dentist tells us she asked for a refund, and they sent her the money. The rest of the details, they tell us, are covered by HIPPA privacy laws.