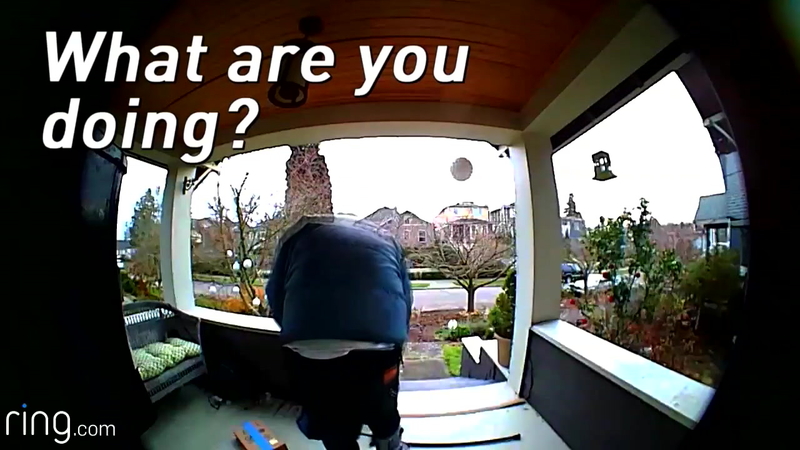 Woman scares thief with her voice

The time of year of tech goodies is upon us. Lusted-after, mostly, but in this case, lauded.

Lesley Young foiled a potential crime--at her front door with a cell phone, and a doorbell camera system called "Ring."

"So I kind of watched it for a second, and kind of just, wow, like, is this one of the neighbors grabbing my stuff, and then I quickly realized that it wasn't," Young said.

And there it was, a random man with an unconvincing cane and leg cast, rifling through young's Amazon packages.

"I don't think he had any idea that I could see him."

Despite sitting in a meeting with clients at a Los Angeles construction site, the camera sent an alert to her home---and showed that live video feed.

And Young was able to speak up.

The spooked man was only able to snag one package, but Young wasn't backing down despite being more than 1,000 away.

Startled or shamed---maybe a bit of both---he pushed the package back onto the porch!

"I was really surprised," Young said. "He put it back and then he took off."

Young spread the clip and story online---helping to keep others aware. Oh, and the package that was nearly stolen? It had another one of young's pieces of technology inside.

An LED candle: a high tech fix for an age-old problem.

"I guess you feel a little bit safer knowing that it's just watching on camera and talking to someone so you feel relatively safe."
Related topics:
technologywashingtonpackage theft
More Videos
From CNN Newsource affiliates
TOP STORIES