Tasmanian devils return to Australia for first time in 3,000 years 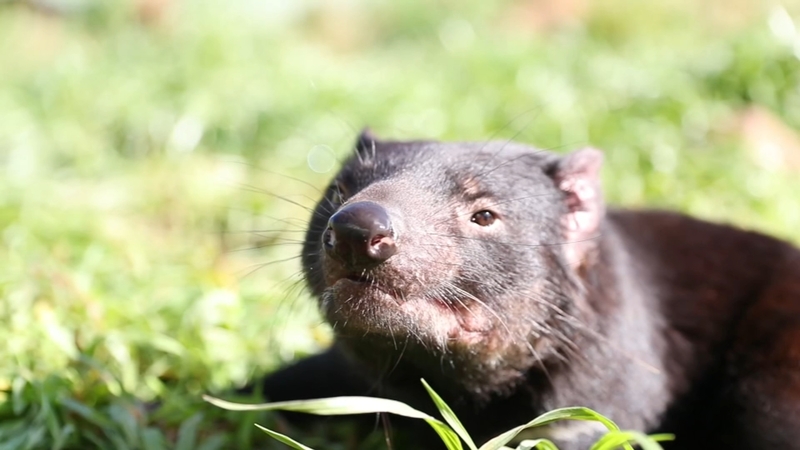 After 3,000 years, Tasmanian devils are returning to Australian mainland

(CNN) -- Eleven Tasmanian devils have been reintroduced to mainland Australia, more than 3,000 years after they died out there.

The carnivorous marsupials have been released into a 400-hectare (988-acre) wildlife sanctuary north of Sydney, New South Wales, Australian NGO Aussie Ark said in a statement.

"In 100 years, we are going to be looking back at this day as the day that set in motion the ecological restoration of an entire country," said Tim Faulkner, president of Aussie Ark.

"Not only is this the reintroduction of one of Australia's beloved animals, but of an animal that will engineer the entire environment around it, restoring and rebalancing our forest ecology after centuries of devastation from introduced foxes and cats and other invasive predators."

The team behind "Magic of Disney's Animal Kingdom" gives On The Red Carpet an inside look at the new Disney+ docu-series.

Tasmanian devils died out on the mainland after the arrival of dingoes and were restricted to the island of Tasmania. However, their numbers suffered another blow from a contagious form of cancer known as Devil Facial Tumor Disease (DFTD), which has killed around 90% of the population since it was discovered in 1996.

There are now just 25,000 wild devils left in Tasmania, and Aussie Ark has been working to conserve the species for the past 10 years.

The team released the 11 devils on September 10, following an earlier trial involving 15 of the marsupials, which means 26 Tasmanian devils now live in mainland Australia.

The devils come from Aussie Ark's breeding program, which has grown from 44 individuals in 2011 to more than 200 today. The team raises the devils using methods that foster natural behaviors, so they have a better chance of survival when released into the wild.

"Without Aussie Ark's incredible work and perseverance over all of these years, the recent devil reintroduction would not have been possible and instead of looking forward to the recovery of the species, we would be watching the devil slip into extinction," said Don Church, president of the Global Wildlife Conservation charity.

"This is an incredible example of how to rewild our planet, bringing back the natural systems to the benefit of all life on Earth."

Tasmanian devils are the world's largest carnivorous marsupials and are native apex predators. This means their reintroduction will help control populations of feral cats and foxes that hunt other endangered species. Devils are also scavengers, which helps to keep their environment free from disease.

Aussie Ark is planning two further reintroductions involving 20 devils each, and it will also reintroduce other cornerstone species into the wildlife sanctuary as part of a plan to rewild the environment.

The team will track the animals using radio collars, camera traps and regular surveys to find out how they are faring.

Faulkner hailed the project as a ray of hope after Australia's devastating 2019-20 wildfire season, which killed around three billion animals.

"This is our response to that threat of despair: come what may, ultimately we will not be deterred in our efforts to put an end to extinction and to rewild Australia," he said.