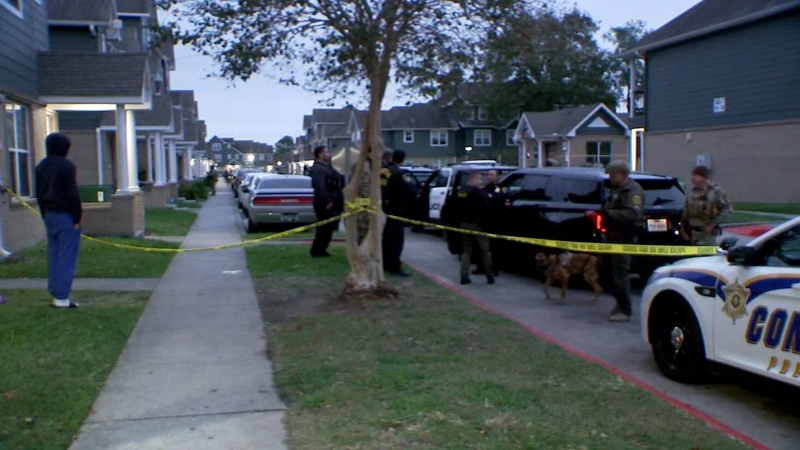 HOUSTON, Texas (KTRK) -- A woman and two children are safe after a man with a gun barricaded himself inside their north Houston apartment, sparking an early morning SWAT standoff.

Houston police were called for a disturbance with weapons at the Oxford Place Apartments in the 600 block of Berry Road near Irvington just after 3 a.m. Sunday.

Police said the call for help came from a child inside the apartment.

HPD SWAT, negotiators, and PIO are responding to a scene in the 600 block of Berry Road in nroth Houston.

Preliminary information is a robbery suspect threatened a family member with a gun and is now barricaded inside an apartment.

When officers arrived, a woman came to the door, but was reluctant to let police in, according to HPD.

Officers reportedly suspected something was wrong based on her body language.

Police were able to remove the woman and the two kids, both around 10 years old, from the apartment. But the woman's boyfriend, who officers learned was armed, was still inside, according to HPD.

Officers learned the woman and her boyfriend were in a verbal dispute when the boyfriend reportedly pulled out a pistol and held it to her head.

One of the children in the apartment witnessed the incident and called 911, police said.

Officers tried to make contact with the boyfriend. They eventually called SWAT and hostage investigators to the scene after they learned he was armed and wanted on multiple open warrants, including assault with a deadly weapon.

At one point, officers thought they heard a muffled gunshot inside the apartment. They were eventually able to talk to the boyfriend on the phone.

After almost four hours, the man gave himself up, and police said it was thanks to the help of a coworker.

ABC13 spoke to the coworker about what she said to make the man turn himself in.

"What we found was that he had actually dug a hole into a wall into a neighboring unit," said Commander Megan Howard with HPD's Tactical Operations Division. "We don't know if he was trying to escape, to get past officers while we were there. While we were on scene, we could hear something going on inside, so it appears he may have been trying to burrow his way out of the apartment to escape."

The man was arrested for his open warrants, and police expect he will face a new aggravated assault with a deadly weapon charge after Sunday's disturbance.