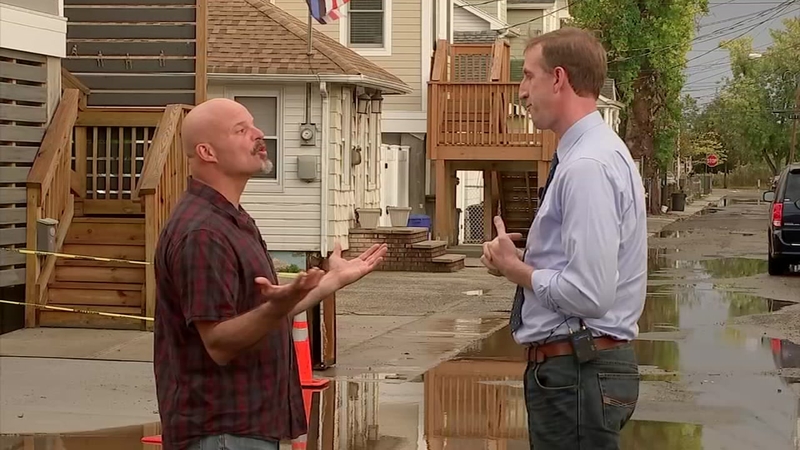 NEW YORK CITY (KTRK) -- With as many as 65,000 Houston homes flooded in Hurricane Harvey, the city will need billions in aid to recover. The State of Texas asked for $61 Billion statewide from the federal government. Houston's Harvey recovery czar insists neighborhood recovery is his first priority but the feds' response and a Houston spending plan is months away at best. ABC13 Investigates is not waiting to see how giant projects roll out.

Right now, New York City is marking the fifth anniversary since Super Storm Sandy laid waste to miles of New York's coastline. The city is still rebuilding and planning to be more resilient, but our investigation reveals victims should not expect a fast hand up.

Superstorm Sandy hit New York City before Marc Alvarez was ready to leave. As waves rolled up his street five years ago, Marc and his family ran through back yards to get to safety. When they got home days later, destruction was everywhere.

"It was like a war zone," Alvarez said. "It was everything you know turned upside down."

Today, nearly five years to the day after Sandy hit New York, Marc's home hasn't been completely rebuilt yet. Alvarez used FEMA flood insurance to make emergency repairs in the months after the storm. It was livable, but not lifted out of the way of a future storm.

Ted Oberg looks to find out what lessons can be learned from Hurrciane Sandy, five years later.

Alvarez is one of thousands of New Yorkers in New York City's 'Build It Back' program - a federally funded plan to lift it and nearly 8,000 homes above the 500-year flood elevation.

New York decided early on to launch a two-track recovery. The first priority was emergency repairs - funded by initial FEMA grants and insurance payments. The second track was making the city more climate-change resistant and resilient in the face of expected future storms which could be stronger and more frequent.

Dan Zarrilli is the city's Chief Resilience Officer. From his office overlooking lower Manhattan, Zarilli told ABC13, "It's incredibly important to rebuild or elevate homes. Those homes are out of the way. That will reduce the federal expenditure and make New Yorkers safer." At the same time

"A lot of patience."

But work is still ongoing at Marc's house. He hopes to back in by Thanksgiving. It's been a long time for thousands of New Yorkers - almost all of whom live miles away from the famous New York skyline.

"At this point, I would have hoped our families have returned and our neighborhoods were made whole," New York City councilman Mark Treyger said.

New York faced a housing crisis in the aftermath of Sandy- tens of thousands of flooded homeowners - most of the homes built just above ground level - 80 percent of whom didn't have flood insurance. Estimates suggest there are as many victims without insurance here and the problem is just how to rebuild.

"We do have an obligation to help because their life savings is in this home," Treyger said.

While it was ambitious, it hasn't been easy. The $3.3 billion dollar 'Build It Back' program is hundreds of millions of dollars over budget. As many as one in five of the participants is still out of their home.

"Hold on!" Sandy victim Sophia DeVirgilio said. "You are in for a ride!"

Sophia and her husband Lenny still stare at a hole in the ground where their house once stood.

"Somebody help us!" Lenny said.

Well aware of Houston's upcoming struggle and his own constituents trials, Councilman Treyger encouraged ABC13 to bring home a message of eyes wide open optimism. Treyger - who has studied the Build It Back program extensively - gave Houstonians advice:
- future programs need to be honest about expectations and costs. In New York, victims weren't certain if accepting insurance or FEMA payments would hurt their Build it Back grants. Houston victims need to make sure of the rules when a plan is announced.
- Treyger says non-profits like Habitat for Humanity should be allowed into the program to compete for work.

- Treyger says using some of the federal money to hire case managers for victims is essential. Government programs aren't easy to navigate and case managers are a necessity to help navigate the system.

Even success stories cost multiples of what a home was worth before the storm, in some cases $750,000 to nearly $1 million dollars to raise a single home.

"To raise my house like this I can never afford to do," victim Tommy Minami said.

But in New York, even without flood insurance, government money paid hundreds of thousands of dollars to get it done all over this city.
"Bureaucrats shouldn't be building homes," victim Marc Alvarez said.

They will still tell Houstonians to push for a program like this.

"The amount of money they've spent and continue to spend and the waste is astronomical," Alvarez said. "Is it worth it? It's going to be worth it to me because we're going to get back in the house."

It is one model Houston leaders are examining as they look to rebuild devastated neighborhoods, but already warn every dollar spent elevating or fortifying homes is a dollar that can't be spent on another priority.

Dan Zarrilli can look out over lower Manhattan and see flood but also the future.

"It was nine feet of surge sitting on top of 5 feet of high tide," Zarrilli said.

He better have a clear vision of what's to come. He is New York City's Chief Resilience Officer. The bottom line: he's the guy in charge of keeping climate change or another storm from laying ruin to America's largest city, a project that became far more important after Sandy hit five years ago.

"The goal is not just to fight the last war but to make sure we look forward to all the threats that face us," Zarrilli said.

In other words, don't just protect from Sandy or Harvey or Ike, but from all of those and what comes after. Six months after Sandy, New York issued a massive report examining the city's vulnerabilities and possibilities for resilience. It was a roadmap for projects and hoped to identify funding. Years later, New York continues to mandate regular progress reports. While recovery may be slow, accountability is on-going. Planners are proud to have maintained that.

New York is looking at a set of projects, everything from already updated zoning and building codes to an already completed elevated boardwalk in the Rockaway section of Queens to a massive set of berms Zarrilli hopes will one day encircle lower Manhattan.
"It has to be continuous in some way during a storm," Zarrilli said.

"It's more of a 'J' than it is a 'U' because they don't have the funds for the entire 'U' yet," New York City councilman Mark Treyger said.

And there is the big problem. Resiliency projects in New York or Houston aren't cheap. The federal government is the only place to get that kind of money and they work slowly.

"We did a groundbreaking in 1995," Jonathan Gaska, Queens Community Board member, said.

It was for an Army Corps of Engineers beach replenishment project that finally was completed 17 years later after Hurricane Sandy.

"Governments are very good at hiring consultants and coming up with a plan," Gaska said. "They're not very good at implementing it and that's our fear."

Five years after Sandy, New York has a billion in projects funded, billions more waiting for study let alone construction, and that's tough to hear in Houston where we want billions more.

"Houston needs resources, we need resources," Treyger said. "If there is enough to build billion dollar weapons we will never use in our lifetime, there should be enough to help our people rebuild."

Five years in, one New Yorker told us, he is pessimistically optimistic. It may be the best we can hope for.

"I think as a nation, the process of disaster recovery and dealing with flood risk does not work very well," Zaralli said. "An effective federal partner would be incredibly powerful. That is not what we have right now."