Deshaun Watson sued over 3 images posted to his Instagram of 1.4 million followers 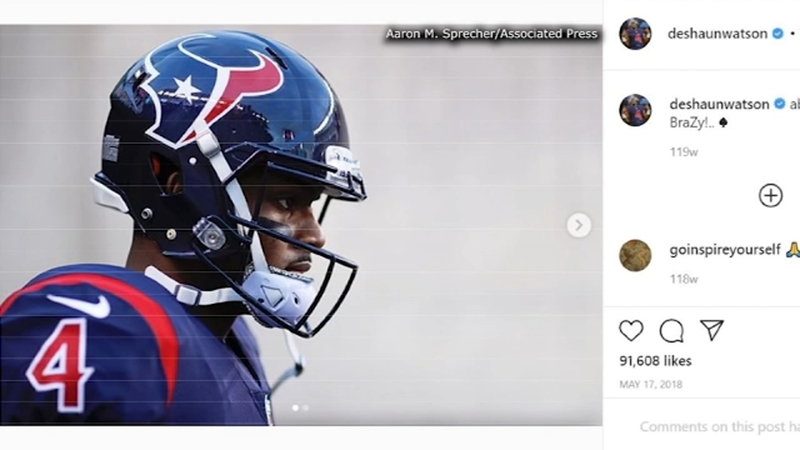 HOUSTON, Texas (KTRK) -- With the ink barely dry on his $177 million contract extension with the Houston Texans, Deshaun Watson is facing a lawsuit that claims the quarterback posted three images to his Instagram without a photographer's permission.

Aaron M. Sprecher's lawsuit, which was filed in U.S. District Court on Monday, alleges the star quarterback never had a license from the Associated Press, the license-holder of the photos, to repost them to his social media account, which currently boasts 1.4 million followers.

The images date back from September 2017, May 2018 and back in January of this year, virtually chronicling Watson's rise in the NFL from his 2017 rookie year.

The 2017 image shows Watson sporting sunglasses, ear-covering headphones, a shirt, suit and bowtie during a pregame walk to the locker room.

The 2018 image shows a profile of Watson in helmet, pads and uniform, from the shoulders up.

The 2020 image captures Watson signing autographs for fans while at a Pro Bowl practice.

According to the lawsuit, the former two images remained on Watson's account, while the Pro Bowl photo was removed, as of late last month. The photos fetched more than 171,000 combined likes.

"Defendant did not seek or obtain permission, authorization, or a license from plaintiff for the use of plaintiff's photographs," Sprecher's copyright infringement lawsuit states.

The lawsuit does not state a monetary figure that Sprecher is seeking.

You need to watch this fan's reaction when he saw Deshaun Watson riding through downtown Houston.

ABC13 reached out to the Texans. Neither the team nor Watson and his representation gave comment.

Sprecher identifies himself in the suit as "a professional freelance photographer specializing in creating and licensing sports photography, including National Football League events and athletes."

Late Tuesday, attorney Kevin McCulloch gave a statement to ABC13 on behalf of Sprecher. According to McCulloch, his client has faced situations before in which his images have been used by players without payment or credit.

"He and his licensing agency, AP, are always happy to license images to NFL players for personal uses such as this. But as a freelancer, he can't allow players to just take photos without payment or even giving him proper credit, since this is how he earns his living. And no one can seriously dispute this. In fact, it is our understanding that the NFL has made this clear to players," McCulloch said.

McCulloch added that Sprecher tried to resolve the matter directly and without litigation.

"Since it has happened many times, he finally felt he had no choice but to retain our firm to help him resolve this matter. We think it is unfortunate that it came to this point, but we hope that the issue can get resolved quickly and amicably, as Mr. Sprecher certainly has no intention of making this simple matter any more contentious than necessary," said McCulloch.

Sprecher has also been denied credentials to future Texans games, according to McCulloch, who speculated that this was a retaliatory move.

The photographer's social media accounts, the lawyer says, have been targeted by Watson's fans and possibly other NFL players.

From a certain sack to the 10-yard line, Deshaun Watson describes what was going through his mind during the game-winning play.