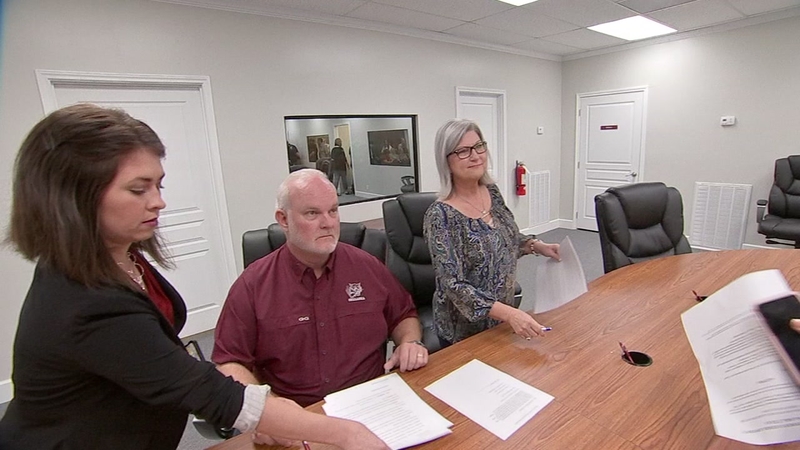 “WE HAVE ACCEPTED THE LETTER OF RESIGNATION from the superintendent.” #breaking #Onalaska ISD board meeting concludes pic.twitter.com/wa736acaJO

In the resignation letter to the district, Redden wrote, "I apologize." and "I have a lot to learn."

Redden had been under fire after screenshots surfaced showing a comment he posted on the Houston Chronicle's Facebook page. It read, "You can't count on a black quarterback."

The incident began on Monday, when the Chronicle posted a meme on its Facebook page, referencing the final seconds of the Texans' loss to Tennessee, in which Watson held on to the ball.

Redden also apologized directly to Watson in his resignation letter.

"I recognize that given the opportunity to respond by criticizing or belittling me, he chose peace instead. In spite of the terrible position I put him in, he showed himself to be the kind of role model I'd be proud for any of my students to follow," Redden wrote.

More than 25 people filled the special meeting, waiting to hear more from Redden, but for the most part, they were satisfied with the final outcome.

"The comments had me physically ill. It showed me his heart, and it wasn't good." Onalaska resident Rosemary Covalt said.

Redden had been with the district for 12 years, and a part of public education for 42 years.

I want to express my deepest apologies to the Board of Trustees, Staff, Students and Patrons of the Onalaska Independent School District for the comments I made on Facebook. The comments were wrong and inappropriate and have been an embarrassment to the District, my family, friends and to me. For this I am deeply sorry.

As an educator, this experience has taught me that I still have a lot to learn. My comments were not only uninformed but also hurtful and I understand now why they were offensive to so many people. I'd like to apologize directly to Deshaun Watson. I recognize that given the opportunity to respond by criticizing or belittling me, he chose peace and positivity instead. In spite of the terrible position I put him in, he showed himself to be the kind of role model I'd be proud for any of my students to follow.

Also, I want everyone to know that my comments in no way reflect the nature of the Onalaska Independent School District or the Onalaska community. These are caring, thoughtful communities where there is no place for racism.

Moving forward, I believe it is in the District's best interest that I resign from my position. Accordingly, I hereby submit my resignation as an employee and as Superintendent of the Onalaska Independent School District to be effective 11:59 p.m. September 22, 2018

I would like to thank the OISD School Board of Trustees and staff for the past 12 years of working with you in Onalaska and in the field of education. I do hope that those who know me well and those who have worked with me will remember me for my body of work over 42 years in public education, rather than by my unwarranted and inappropriate comments.