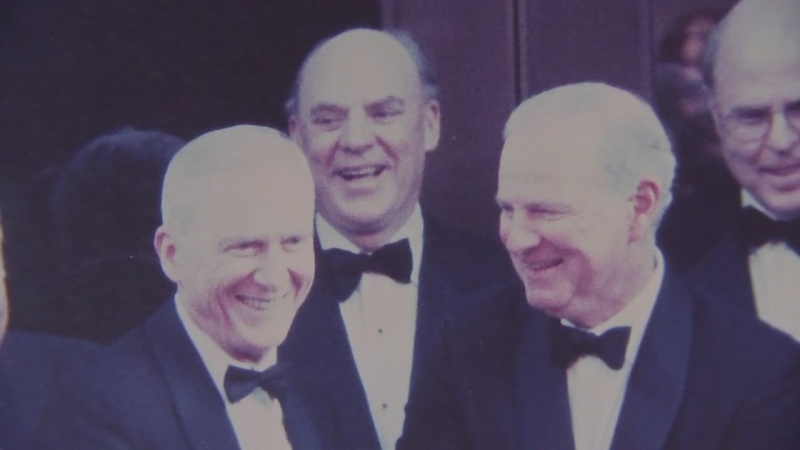 HOUSTON, Texas (KTRK) -- Houstonians may know Bob McNair as the Texans owner and a philanthropist. For the people who knew him, he was a much more complex man.

"I don't think I have a better friend in life than Bob McNair," said former Secretary of State James Baker. "He's been a friend for a lot longer than the 25 years this institute has been around."

Baker, who is in the midst of celebrating a quarter-century of his namesake institute at Rice University, took a moment to celebrate his longtime friend. When the Baker Institute building was dedicated more than 20 years ago, McNair was there. He and his wife have endowed several projects at the institute, and the main hall is named in their honor.

"It's a real loss for Houston, but it's a particularly a loss for my wife Susan and I, because we were close to Janice and Bob," said Baker, choking back tears.

Others know McNair as a fierce businessman, who was never shy with opinions or advice, even if it got him into trouble

"There wasn't a lot politically I agreed with Mr. McNair, by any stretch of the imagination. I was born different, I was raised different," said Chester Pitts, an original Texans player. "Sport found a way for us, no matter what your politics were, what your skin color looked like. We found a way to come together, because ultimately, it's about trying to get the job done, and trying to get Ws."

Pitts says to this day, he still uses some of the business advice given to him by McNair.

"Most don't realize, Bob came to Houston and went bankrupt, running a trucking company, but that didn't deter him," said Baker.

That mentality followed McNair onto the football field, where former Texans media executive Kevin Cooper got to know him.

"The one thing I liked most about him, he always made you feel like you were working with him, not for him," said Cooper, who like others, acknowledged that McNair did not always express himself in the most eloquent way.

"He's said, 'Hey, I'm going to let my actions define my legacy and what it was, and the way I treated you,'" said Cooper.

When McNair's comments at an owners' meeting drew nationwide attention a year ago, tensions were certainly raised among current and former players. Pitts admits there were rough patches, but emphasizes McNair was a good man, and nobody's infallible.

"There are times when Mr. McNair said things, like we all said things. I would bet the farm that he wish he could pull it back. But at the same time, how many can someone be at how someone else feels?"

Continued Pitts, "He was the guy who out-savvied numerous amount of players and found a way to get football back to Houston."

And that will be McNair's most lasting legacy.