Jerry Dipoto out as GM, sources say; Angels have not confirmed 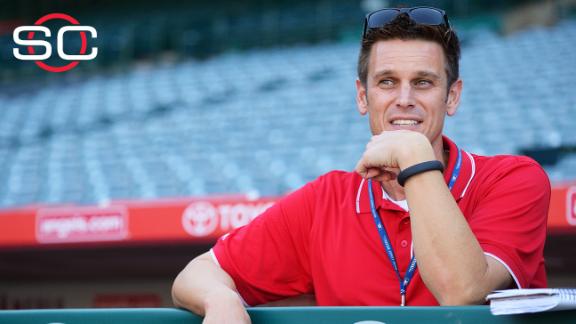 "He's definitely out," a Major League Baseball source with knowledge of the situation said of Dipoto.

A second industry source confirmed to ESPN.com on Wednesday morning that Dipoto is finished with the Angels.

Dipoto did not respond to a text message seeking comment.

Reports of ongoing friction between Dipoto and Scioscia surfaced Monday. Fox Sports reported Dipoto recently held a meeting with Scioscia and the coaching staff that turned contentious. Dipoto reportedly was displeased that the Angels' staff was not making a better effort to convey scouting information and statistical data provided by the front office to the players.

An MLB source told ESPN.com that Dipoto approached owner Arte Moreno with an ultimatum that "backfired." Fox Sports reported late Tuesday that Dipoto had "packed up his office" and left Angels Stadium.

The Angels won their fourth straight game Tuesday night, defeating the New York Yankees 2-1 to move to 41-37 -- four games behind the first-place Houston Astros in the American League West.

Dipoto, who previously had worked in the Arizona Diamondbacks' front office, replaced Tony Reagins as Angels general manager in October 2011.

This isn't the first time Dipoto has clashed with Scioscia.

In 2012, Scioscia was reportedly furious when Dipoto fired then-Angels hitting coach Mickey Hatcher. But Scioscia and Dipoto worked through their issues with intervention from Moreno, and the Angels functioned well enough to win a major league-high 98 games and capture the AL West title last season.

"I think we're a good team," Scioscia told reporters when asked about his relationship with Dipoto before the Angels-Yankees game Tuesday night. "The one real issue earlier was when they let Mickey go. But we've moved past that. We've moved way past that."

Dipoto signed a three-year contract with two club options upon joining the Angels before the 2012 season. The Angels exercised the 2016 option year on his deal June 12.

Scioscia is in the seventh year of a 10-year, $50 million contract with the Angels. He can opt out after this season, but he would be walking away from $6 million annual salaries in 2016, '17 and '18.

The Dipoto-Scioscia clash is the second rift to have rocked the Angels' organization this season. In late April, the Angels paid most of the $80 million left on troubled outfielder Josh Hamilton's contract and traded him to the Texas Rangers.