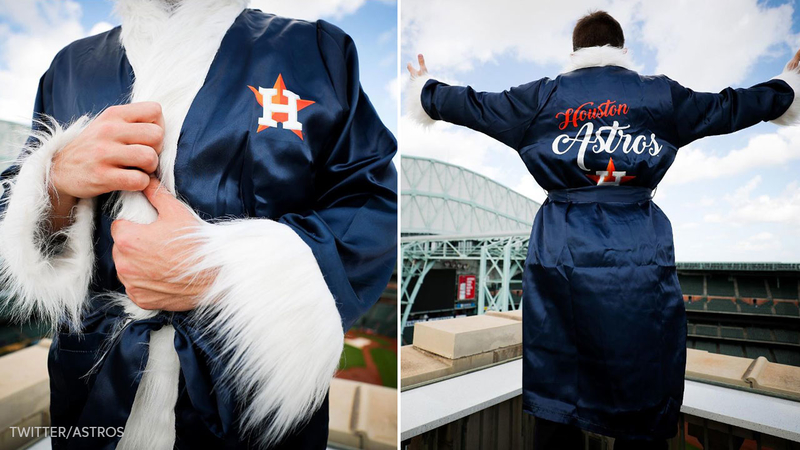 Josh Reddick as 'The Bachelor'? It almost happened

As part of their monthly special edition bobblehead drops, the Astros showed off July's figurine: "Wrestling Reddick," which boasts the outfielder in American flag trunks, a championship belt and a blue robe, inside a mini "squared-circle."

Just hours after the figurine was announced, the team said Wrestling Reddick bobbleheads were sold out.

But not to completely douse the heat of Reddick's merchandise fire, the Astros also offered up the robe that Reddick's bobblehead is rocking. The clothing item is in Astros blue, with white fur on the collar and sleeves. "Houston Astros" in regal word type and the team's star "H" logo also adorn the robe.

Now, it's not exactly bejeweled like the robes that his hero Ric Flair strutted in back in the day, but it should be a choice clothing item for the die-hard 'Stros fan.

As of Thursday afternoon, the team's store at Union Station still had the robes available for sale.

Quantities are extremely limited and available at the #Astros Union Station Team Store NOW! Limit one per customer.

Reddick and Astros a match made in baseball heaven

Congrats to Josh Reddick and his wife Jett! The two revealed they are having twins!

You can say they had a MARVELous wedding!

Report a correction or typo
Related topics:
sportshoustonhouston astrosclothingminute maid park
Copyright © 2021 KTRK-TV. All Rights Reserved.
TOP STORIES
How residents in this Harris County neighborhood became numb to crime
Big warm up ahead but another cool front in the forecast
Federal investigators at site of MD-87 plane crash in Waller Co.
White House details plan to roll out COVID vaccines for younger kids
5K run to be held in murdered woman's honor
Nikolas Cruz pleaded guilty to murder in 2018 Parkland massacre
US expected to authorize Moderna, J&J boosters as soon as today
Show More
Houston executive 1 of 21 on board jet when it crashed in field
Americans arrested for trying to board flight in Switzerland
Loved ones remember mom of 3 killed during home invasion
UT Rio Grande Valley offers free tuition and fees to certain students
Astros awaken for 7 runs in 9th to beat Boston and tie ALCS
More TOP STORIES News