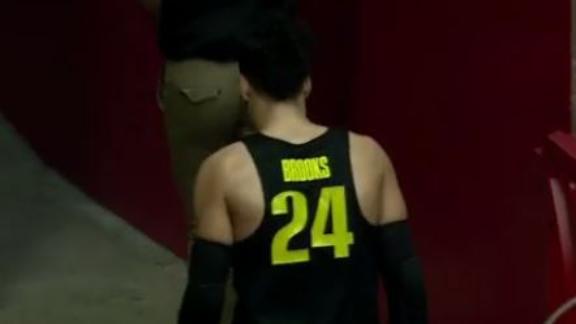 Oregonguard Dillon Brooks was ejected from the Ducks' 85-66 victory Saturday for kicking a Washington Stateplayer in the groin.

Trailing 16-15, Brooks drove the lane, missed a shot and was fighting for a rebound with two Cougars defenders when he fell backward to the floor with 13:25 remaining in the first half. As he fell to the ground, his right leg shot up and caught Cougars forwardJosh Hawkinson in the groin.

Brooks, a junior who was averaging 14.3 points per game this season, was assessed a flagrant 2 foul and was ejected. He had scored seven points before leaving.

After reviewing the play, the Pac-12 announced Sunday it would take no further action against Brooks.

No. 15 Oregon next plays at home against Oregon State on Jan. 14.